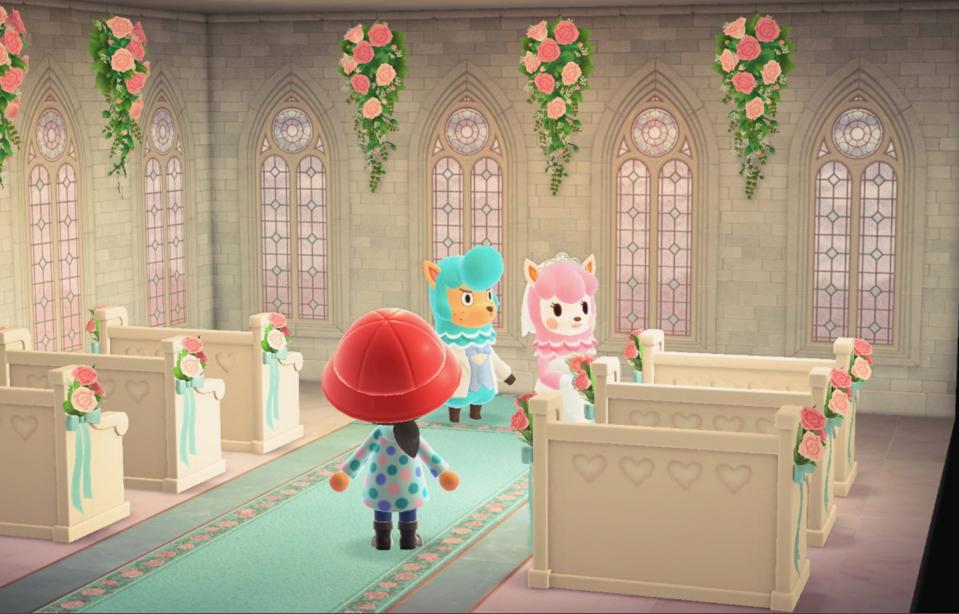 It’s a funny sort of event in Animal Crossing: New Horizons this month, with series staples Cyrus and Reese returning to celebrate their anniversary in a month-long event. It’s wedding season, where the two Alpacas take center stage in a photo-oriented challenge that will go all month long. Read on for more info, how it all works. how to get the rewards, and what’s up with heart crystals.

To start it, you just need to go to Harv’s island, which you can access from the airport. There, you’ll find Cyrus and Reese, who want you to take over staging and taking photos that recreate their past, presumably because Harv is wicked creepy.

On this first day, I was tasked with recreating Cyurs and Reese’s ceremony, which was, in all honesty, really easy. You have access to all your furniture to get the thing done, but you’re going to lean on special furniture created by Cyrus to set the scene, which takes a lot of the guesswork out of it.

I got some pews and some hanging rose decorations to work with: the correct rugs and walls were already in place. It was a simple matter of plopping down three pews on each side and decorating the walls with as many rose decorations as seemed appropriate. When I was ready to go, Reese asked me to take the picture, again wisely avoiding Harv. I obliged, took myself out of the photo, and snapped the shot.

The New Normal: Managing Anxiety During A Pandemic

When you’re finished, Reese will tell you if you did a good job or not. If you were successful, she’ll give you some Heart Crystals that you can trade with Cyrus for any of the items that you could use in this scene. I opted to save mine on the first day, hoping that some of their later pictures had some less saccharine stuff in there.

And that’s it: we’ll get more scenes as the days go on, and we’ll update you from there if there are any major changes or difficult photos. The first day was easy as pie, but the rest may not be.