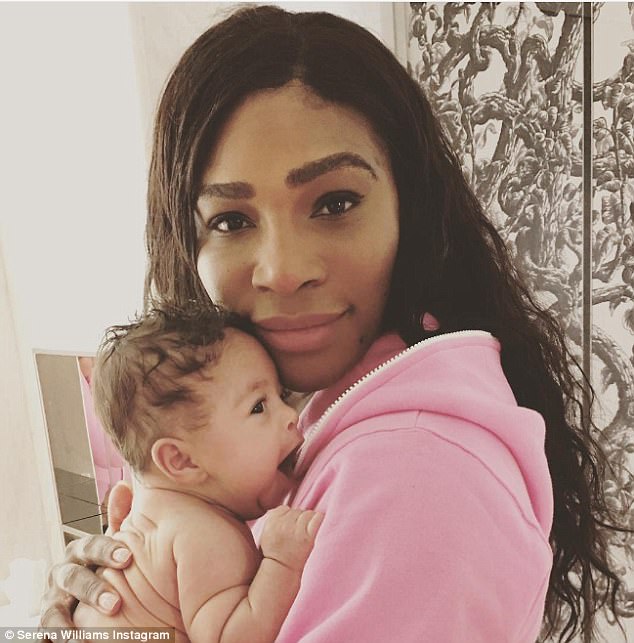 Look at that bling!

Serena Williams gave fans a glimpse of her impressive new wedding ring while her adorable daughter, Alexis Olympia (who is almost 3-months-old!) rocked a leopard print dress on the little girl’s Instagram Wednesday.

“Daddy knows how much I love leopard print,” the caption, written as if said by the baby, read.

Williams’ wedding ring glittered as she held on to her daughter’s legs.

The star complimented her massive emerald cut diamond engagement ring with an eternity band that had a teardrop concave to create a halo around the large center stone of the engagement ring. Taking the rings’ bling to a new level, at the tip of the teardrop was three more pear cut stones.

The tennis champion, 36, married Reddit co-founder Alexis Ohanian, 34, in a fairy tale wedding at the Contemporary Arts Center in New Orleans, Louisiana, on Nov. 16 (the birthday of the Reddit founder’s late mother Anke) — complete with her princess ball gown that made close friend and Vogue editor-in-chief Anna Wintour very proud.While the couple had a magical wedding, their baby girl stole the spotlight on their special day, arriving in the arms of her grandmother wearing a sweet white dress.

Her father is also known to spoil her, as Williams revealed in an Instagram post in early November.

“I do love Alexis Sr. @alexisohanian but if he buys one more outfit or toy for Olympia @OlympiaOhanian I’m going to explode,” the 23-time Grand Slam champion wrote.

Since her daughter’s birth in September, the tennis champ has been sharing shots of her sweet baby girl on social media, including an adorable shot of Alexis Olympia and her father after a bath.