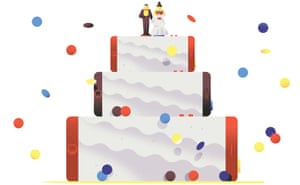 Have you heard about the hot new startups disrupting the wedding industry? Actually, you probably haven’t – because as US website Vox reported the other day, the wedding industry has proved frustratingly hard to disrupt. At first glance, that’s baffling: how could you not make money from a sector reportedly worth £230bn annually, full of couples in love and feeling free with their cash? Yet there isn’t an “Uber for weddings”. And it’s illuminating to understand why – because there’s no better way to grasp how the modern technology economy is changing us, psychologically speaking, than to look at those cases where it’s failed.

From Silicon Valley’s point of view, there are two big problems with weddings. The first is that they take place in a physical setting. (And people really care about getting that part right: the venue is usually by far the biggest single expense.) So they can’t be fobbed off with some alternative virtual experience, where the profit margins are higher – by contrast to Amazon, say, eliminating the costs of bricks-and-mortar stores. The second, even bigger problem is that most people get married only once, or maybe twice. So there’s no customer retention. As one disillusioned wedding startup founder told Vox: “People forget that their customers leave after a year and they have to get a whole new set of users.”

What does this suggest about all those areas in which digital technology doesnow run our lives? It’s this: that to triumph, firms must arouse compulsion in their users. Facebook needs you to be addicted, because its business model is selling your attention to its advertisers. Uber needs you addicted to convenience, so that you’ll not only choose it over a traditional taxi company, but also lower your personal bar for when it’s justified to take a cab to begin with. In the hyper-competitive digital economy – fuelled by venture capitalists seeking eye-watering returns on their money – it’s no longer enough to make an appealing product and have some people want it from time to time. (That’s the business model of the traditional wedding industry, among many others.) Instead, you need addicts. And though people can be induced to use social media addictively, while ordering Deliveroo night after night, pausing only to take an Uber to the pub, wedding addiction remains a rarity.

There’s one more area in which it’s useful to examine Silicon Valley’s tribulations: sex toys. Web-connected “smart” sex toys haven’t exactly been a failure. But they’ve been a tricky sell, because users suddenly can’t ignore the fact that their devices are monitoring their actions and collecting their information. Gmail does it, Uber does it, Spotify does it. But it’s possible not to think about it – right up to the point at which the intimate data being collected is as intimate as it gets.

The moral of these stories isn’t that digital technology is bad. Rather, it’s that when it seems to be offering you a bargain (a free social network, cheaper taxis, etc ) you’re almost certainly paying for it somehow, with addictive behaviour, poorer quality of experience, or loss of privacy. Apparently, weddings and sex are the last areas in which people won’t take that deal. For now, anyway.