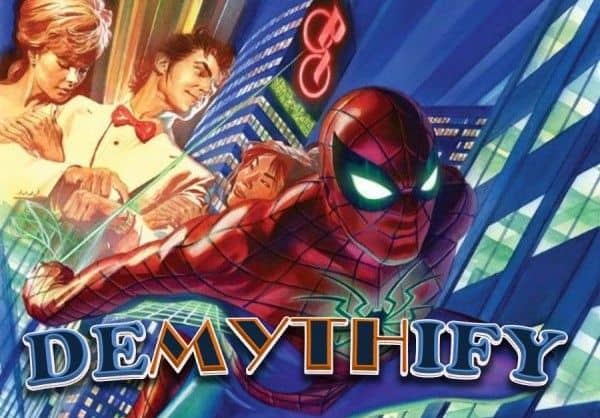 I had planned a different piece to run today, but I felt I needed to, or at least wanted to, comment on the hullabaloo this July 4th weekend involving Amazing Spider-Man writer Dan Slott and Bleeding Cool Editor-in-Chief Hannah Means-Shannon a.ka. Hannah Menzies. This appears to be a new front in the ebbing and flowing Marvel vs. Bleeding Cool saga.

It all started innocently enough with the Bleeding Cool EIC being interviewed for a Wordballoon podcast. The EIC lifted the veil on how Bleeding Cool makes decisions on what to publish and what not to. Her perspective elicited a strong response from Amazing Spider-Man writer Dan Slott. He, and Marvel, it appears were upset at Bleeding Cool’s spoiling of the titles to be part of the All-New All-Different Marvel initiative that was rolling out as part of a free preview on last Wednesday’s #NCBD (New Comic Book Day). 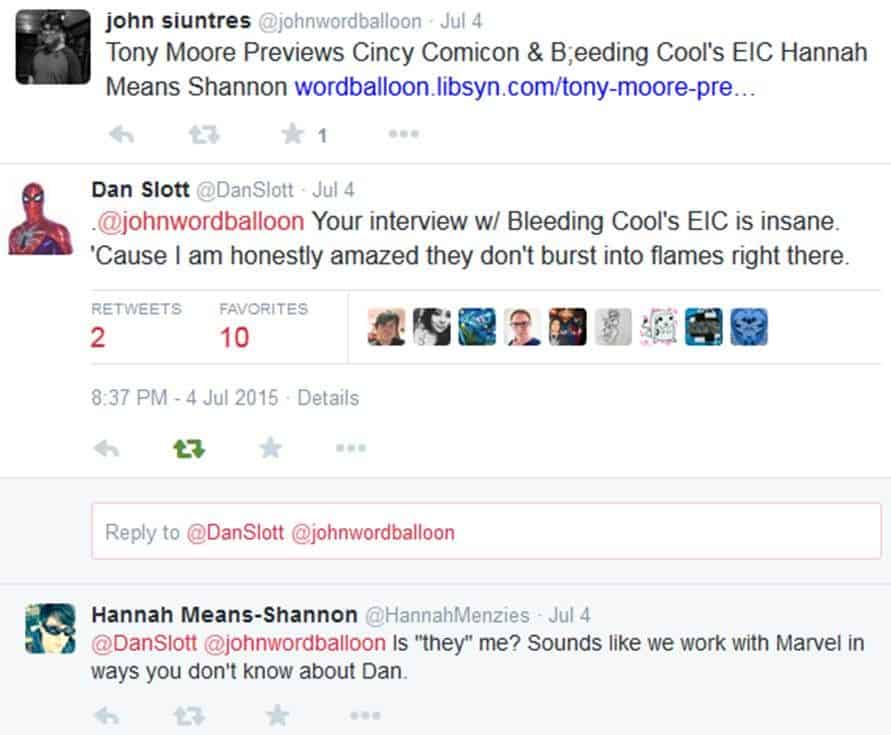 Bleeding Cool’s EIC took issue with Dan referring to her as “they”; more on that in a minute. Slott continued to reveal what parts of the interview that he found troubling; indirectly calling the Bleeding EIC a liar; the fire motif of Slott’s is likely a reference to that old playground jingle: “liar, liar, pants on fire“.

Criticism of Bleeding Cool’s spoiling of events days, weeks, months in advance existed prior to the current BC EIC’s tenure. It is a popular site for that reason and others. I read it, as I do others, and – full disclosure – I also wrote for the site for a very short time years ago. That said, the current EIC latched onto Slott referring to her as “they” and “EIC” as opposed to acknowledging she was in fact a she; implying that Slott was a misogynist.

Through that exchange we also learned what Marvel alleges is Bleeding Cool’s modus operandi with regards to leaks; they offer to sit on a big leak they have if Marvel, in this case, gives them a leak directly that they can publish instead.

We also learned what Marvel believes is the sourcing practice of Bleeding Cool; only 1 source is needed for stories. In many media and journalism circles more than 1 source is used to corroborate facts of a story. Bleeding Cool, from what I gather, did not directly respond to this allegation. If they did, and I missed it, so please pass it on.

The exchange also included more direct discussion about last week’s All-New All-Different Marvel BC leak. The BC EIC indicated that she understood that Marvel was seeding those stories with their media partners for the same day that Bleeding Cool leaked the titles and creative teams to be part of Marvel’s free preview of All-New All-Different Marvel. That was refuted by one of Marvel’s Senior Vice Presidents, Tom Brevoort. So Marvel accused the Bleeding Cool EIC of lying in her twitter defence of the BC’s ANAD leak last week. 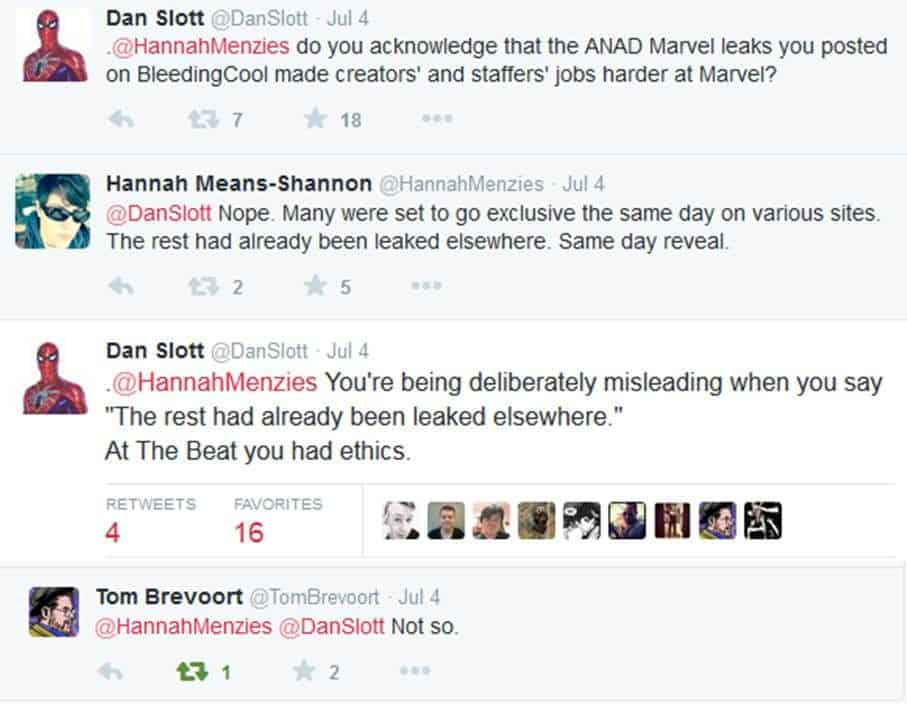 So, what do we make of all this?

Well, the issue of leaks and spoilers remains a thorn in the side of publishers. That’s understandable. Bleeding Cool is the most popular comic book site online with regards to leaks and spoilers. They have their own decision-making process about what to run, when to run, etc. and, if true, when to barter one leak for another from a publisher.

We also, on this site, report on leaks and spoilers on occasion. It’s not a huge part of our business plan to be honest. The most we do spoilers-wise is same-day spoilers and reviews of titles on NCBD with big bold “SPOILERS” noted in the headline. That allows readers who don’t want to read it to avoid it; we also put a spoilers warning in the opening part of the piece in case it was missed in the headline. Also, to be fair, we know that the word “spoilers” in the headline drives traffic to the site, but it truly is a warning foremost as we’re fans of the medium here first.

Bleeding Cool also provides spoiler warnings in their headlines plus include a nifty stop sign icon in their pieces; a “go no farther” kind of message if readers want to avoid being spoiled.

There is no happy balance on when to run a leak or spoiler. While I totally understand Marvel being upset with Bleeding Cool over the ANAD Marvel leak, the question for me is where did the leak originate. Bleeding Cool protects their sources which many sites outside of the comics industry do as well and should do. However, I would think if the leak came from within Marvel then Marvel has some issues and BC should at least tell Marvel they have a leak problem; not name the person. If the leak came from Diamond or a printer or a comic book store, I think that is an important consideration in determining when to run the leak. 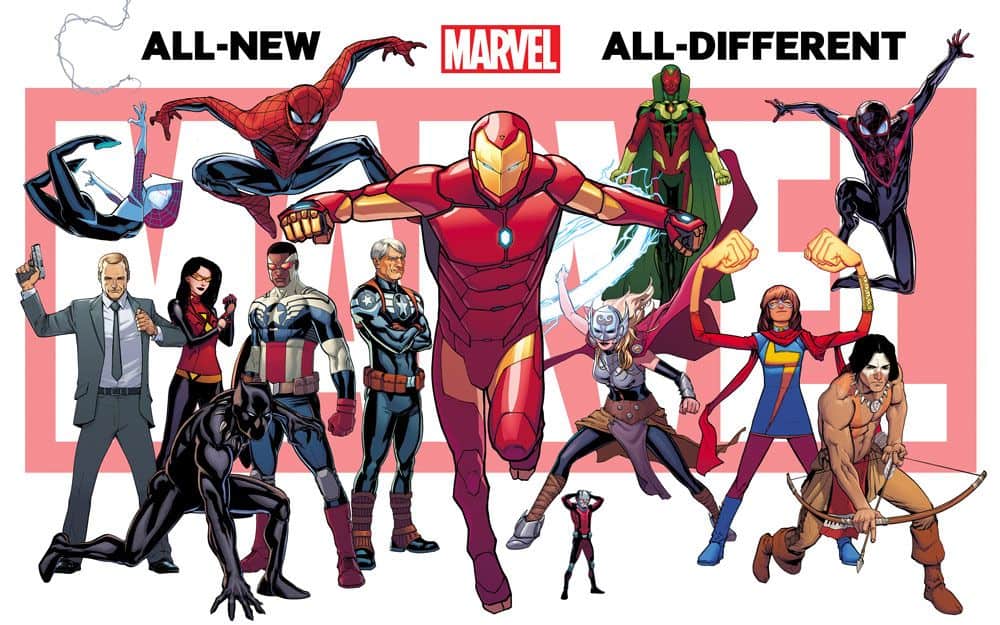 If I was in BC’s shoes, and in fairness we chose not to run Bleeding Cool’s leak on the day they did or the day after as we thought the leak was too early before New Comic Book Day last week (we actually ran ours on NCBD when the preview book hit stands), I’d probably have more sympathy for Marvel if the leak came from Diamond or a printer or a comic store as opposed to a leak from within Marvel itself. That, for me, would be an important consideration on when, not whether, to run the piece(s).

I’m not suggesting BC reveal their source, but understanding where the source is from should be an important consideration in the ethics of coverage by comic book sites like theirs, ours and others.

That aside, I do have concerns about how the debate was handled on the weekend. While I understand why Dan Slott is upset, he did carry himself in an ethical, but at times, heated manner. He predominately posed questions about the content of Bleeding Cool EIC’s interview and her twitter rebuttals. 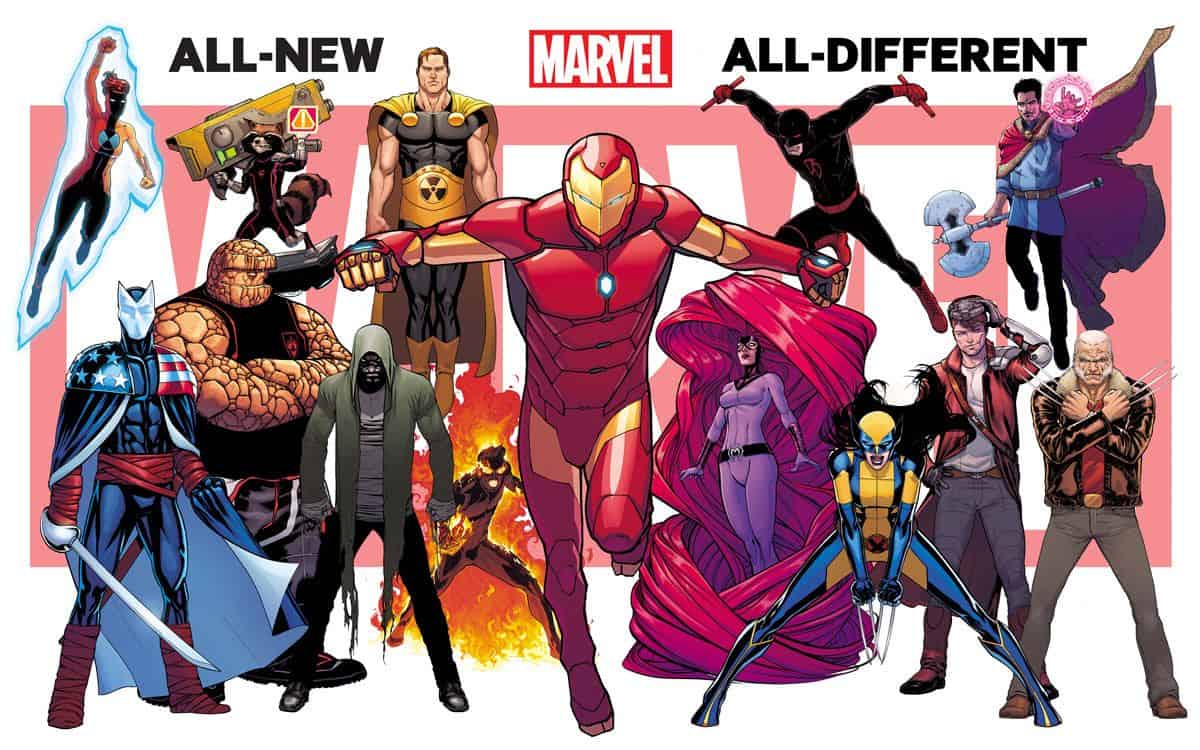 In the way the Bleeding Cool EIC defended herself, particularly throwing up a straw-man that Slott had a problem acknowledging her gender, was a bit of a slap in the face to real aggrieved women and feminists. Not only is that absurd when you read the actual twitter exchange it appears to be a clear attempt at deflection.

In addition, as someone who has worked in media relations, I’d suggest that if you only respond to some allegations and not all, you might want to say nothing at all. The interview with the Bleeding Cool EIC covered how they did their business. When Dan Slott made unsubstantiated comments about the business practices of BC there was – from my reading – no legit response. BC contributor Rich Johnson did throw a tongue-in-cheek response here and there during this exchange, but none were seemingly intended to respond directly Slott’s charges.

In the end, Bleeding Cool will continue to be a well-traveled website. Fans like what they do and that’s why they do more of it. So, whether Marvel’s allegations against BC are real or not – and in fairness we don’t know – it doesn’t matter in terms of the hits and views Bleeding Cool receives because they will still be visited by regular and casual fans daily, multiple times. But, it does matter from an ethics perspective if there is room for that in the comics industry that we all purport to love.