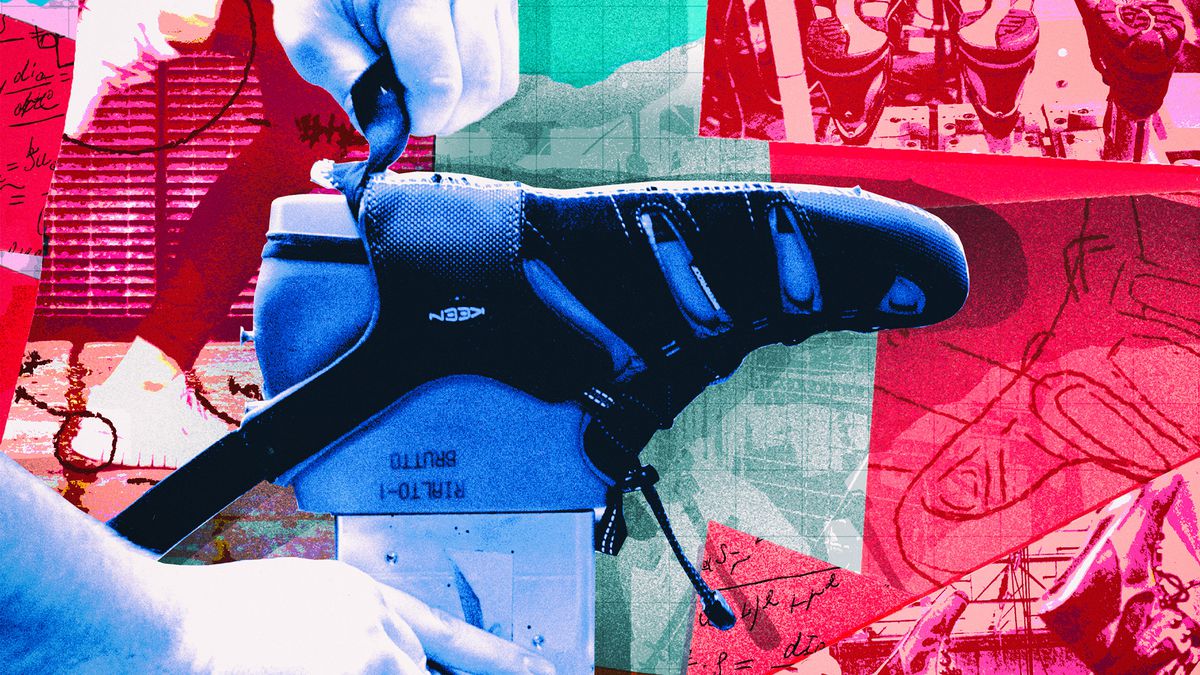 DaisyDaisy Clark, a 53-year-old ultramarathoner from Seattle, has had her fair share of foot pain: aching joints, toenails peeling off in your socks, and even nerve damage (from tying your laces too tight) are all part of the sport. On one of her first 50-mile races, Clark developed a blister “that was my entire heel — one giant blister with blood.”

At the time, Clark was still running in Hoka One One sneakers, a popular brand among ultramarathoners. But the mega-blister taught her a lesson. She began to lubricate her feet, wear toe socks, and “the next time I did a 50-miler, I’d gone to Altras,” Clark said. “I’ve tried almost every brand you can think of and I always come back to them,” she said. “Their women’s shoes are actually built around a woman’s foot.”

Clark’s experience isn’t unusual among endurance athletes — or women. “At the beginning, shoes were built for the people who were running, which were men,” said Benno Nigg, one of the first biomechanists to systematically study athletic shoes. But times are changing: the sneaker industry is now worth $100 billion globally, and the women’s share of the market is growing faster than men’s. This shift is driven by pure athleticism — female runners now outnumber male runners — and by fashion: the rise of athleisure means many Americans wear sneakers around the clock, not just in the gym.

Still, “women are a lot more dissatisfied with their shoes than men are” even though they also tend to have lower expectations for their footwear’s comfort, said Gregory Gray of Heeluxe, an independent shoe research laboratory. Heeluxe’s data suggests that, in general, women’s shoes are up to 18 percent tighter around the toes, 70 percent tighter around the big toe joint, and 68.4 percent looser in the heel than men’s shoes. And we’re not just talking stilettos — women are suffering in sandals, casual sneakers, even athletic performance shoes.

SHRINK IT AND PINK IT

Many brands, researchers, and individual runners like Daisy Clark, attribute at least some of this discomfort to a long history of unisex shoe design. Factories construct shoes around a last — a foot-shaped mold of steel, copper, or durable plastic. Historically, they built men’s, women’s, and even children’s sneakers on lasts based on an adult male foot. The colors changed, but the relative dimensions did not. A size 9 men’s last could make a size 10 ½ women’s shoe. That’s how this practice earned its name: shrink it and pink it.

This technique might have evaded scrutiny if male and female feet were identical. But as a 2009 study in the Journal of the American Podiatric Medical Association concluded, “female feet … are not algebraically scaled, smaller versions of male feet, as is often assumed.” Instead, evidence suggests female feet tend to have a higher instep and narrower heel relative to the ball of their foot, while male feet are longer and broader overall. Forcing women into shoes designed for male feet can have serious side effects, Gray said, including dropped arches, bunions, ankle bone soreness (typically when a shoe collar is too high), and blistering.

MANY ATHLETIC AND OUTDOOR BRANDS ARE NOW BUILDING GENDER-SPECIFIC SHOES

That’s why many athletic and outdoor brands are now building gender-specific shoes. Altra, Reebok, and Asics design all of their women’s sneakers on women’s-specific lasts. Nike manufactures its performance shoes on gendered lasts, though many lifestyle shoes, like Air Force 1s, are still made on a unisex mold. And Keen, Adidas, and New Balance currently sell at least one women’s-specific shoe. Only one company — Brooks — confirmed it still engineers all of its sneakers on a unisex last. (Hoka declined to comment.)

The companies that have invested in engineering and marketing women’s-specific shoes have found remarkable success. Keen’s Terradora boot, which debuted in 2016, is the second bestselling shoe in its trailhead category, according to a company spokesperson. The boot has a more padded (and therefore narrower) heel, a smaller toe box, and higher arch support compared to one of Keen’s more traditional, unisex fits.

“One of the things that sold me when I tried them on is there’s a lot of padding around the Achilles — around the ankle — and that’s something I’ve never experienced before,” said Jamie Wearne, a recreational hiker in Adelaide, Australia, who posts about her Terradoras on Instagram. “It’s something you don’t realize you need before you experience it.”

But the problem seems to run much deeper than a gendered last. Even as brands put more women’s-specific shoes on the market, female foot pain persists.

The problem, it turns out, is that we aren’t sure how to design a safe, comfortable shoe in the first place. And, regardless of their gender, “we don’t know how we can connect a shoe to a person,” said Nigg.

The Nike Zoom Vaporfly 4%, which debuted in 2018, showed engineers can make a faster shoe: the sneaker speeds runners up so significantly, it’s caused an existential crisis in the running community. But how exactly the Vaporfly’s carbon fiber midsole plate and proprietary new foam, ZoomX, lead to faster marathon times is hotly contested.

When it comes to safety, things are even murkier. Decades of research haven’t determined how (or if) shoes contribute to athletic injury or what we can do to prevent it. Runners still get injured as often as they did in the 1980s, when the first shoes advertised with “motion control” and “stability” features began to hit the market. And, as customer feedback shows, sneaker manufacturers can’t even guarantee every customer a proper, pain-free fit.

The issues start with data collection. Shoe scientists tend to “cast a very, very, very wide net,” said Max Paquette, a biomechanist at the University of Memphis. To get as many people in their studies as possible, researchers have tended to include any athlete doing any activity, as long as it’s all in the same shoe. Now, Paquette said, he and other academics are starting to do more controlled experiments that organize participants by factors like gender, age, foot type, experience, strike pattern, and even exercise goals. In doing so, they hope to exorcise the noise and narrow in on the connection between a body and a shoe.

“THE BIAS IS SO MUCH STRONGER THAN WE EVEN REALIZED.”

For women, these mysteries are only magnified. When it comes to elite athletes, researchers have traditionally only studied high-performing men, because it’s easier to control for variables like the force of their stride or the length of their foot. And, Paquette added, “historically scientists have, in a lazy way, avoided studies on women because there’s a confounder of the menstrual cycle.”

This data gap exists in more basic fit research, too. Gray, who has been fighting for women’s-specific shoe design for a decade, found that Heeluxe has tested seven times as many men’s running shoes as women’s. In basketball and hiking, the ratio was three to one. Sandals, high heels, and lifestyle shoes were the only categories where they’ve tested more women’s products than men’s. “The bias is so much stronger than we even realized,” Gray said. “I was like, ‘Oh my god, this is terrible.’”

Data, when it does exist, may also be misconstrued. Take pronation — the degree to which the foot rolls downward or inward when landing. “Initially, people just started to create shoes with the theoretical idea … that if we create a shoe that prevents these excessive motions of the foot … it might actually help us not get injured,” said Paquette. “But it wasn’t based on any real science.”

Today, Paquette said, “we have a ton of evidence, it’s just that it’s all over the place.” In 2013, Danish researchers published the results of a year-long effort to track beginning runners in a neutral shoe. They found that foot posture wasn’t correlated with an increased risk of injury. If anything, people whose feet pronated had fewer injuries than those with a neutral foot posture. But that hasn’t stopped many companies — and doctors — from using earlier research to encourage people who over- or under-pronate to wear shoes to correct these tendencies.

“WE HAVE A TON OF EVIDENCE, IT’S JUST THAT IT’S ALL OVER THE PLACE.”

Anxiety about over-pronation has disproportionately affected female athletes, said Casey Kerrigan, founder of the shoe startup Oesh. Because female bodies tend to have wider hips, they have a higher Q angle — the gradient at which your tibia aligns with your kneecap — which is tied to increased pronation. As a result, women are more likely to have stability and motion control features marketed to them. The marketing sends a weird message. “It’s almost as if women are designed all wrong, and we need to order something” to fix it, Kerrigan said.

In the absence of strong evidence, customers must rely on their intuition. If the shoe fits comfortably, biomechanists like Paquette and Nigg say, wear it. Then again, even our intuition could be compromised: “I could go to Target and get a pair of neutral shoes and probably be fine,” Paquette says. “But I don’t, right? Because the marketing is so strong.”

IN THE ABSENCE OF STRONG EVIDENCE, CUSTOMERS MUST RELY ON THEIR INTUITION

The future of sneaker science could lie in personalization. In 2016, Nike began 3D printing customized shoes for elite athletes, like Olympian Allyson Felix. Brooks, the Seattle-based running shoe company, hopes to bring this technology to the masses by 3D printing perfectly complementary soles for every customer.

Custom kicks sounds like the solution to all our footwear issues — no gendered lasts, no questionable categories like one-size-fits-all motion control — but we aren’t likely to transcend these problems anytime soon.

Nikhil Jain, a senior manager with Brooks, said its Genesys beta project, which launched in 2018, was the first step in creating fully personalized running shoes. The company collected 3D scans from the feet of 300 participants and delivered each of them sneakers with soles personalized for their specific needs. But the shoes weren’t ready for prime time — and won’t be for years to come.

It’s not because manufacturers lack the technology: 3D printers are widely available, and scientists have been successfully scanning feet for decades. It’s that the problem they’re designing for is unclear. “Nothing on the customization end right now outperforms traditional shoes,” Gray says. To make them a truly viable product, “the cost has to be similar, and the experience has to be elevated.”