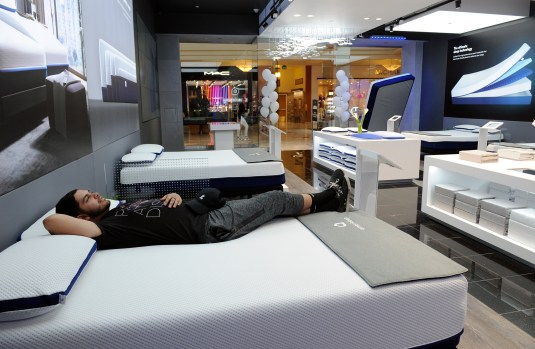 Eddie Machuca tries out one of the beds in the Amerisleep showroom inside Park Meadows mall June 24, 2018. Amerisleep, an online mattress company based in Phoenix, has opened several brick-and-mortar stores, including the one that opened last month in Lone Tree.

The internet opened up an entirely new marketplace for businesses as smartphones proliferated and broadband moved into rural America.

And it wasn’t just services such as airline tickets and hotel reservations — anyone can set up shop on digital Main Street and hock their wares to customers who are passing by, or in this case, swiping or clicking by.

Few industries have capitalized on this trend more than mattress makers. You see the ads on websites or Facebook, and hear them on the radio. They are everywhere. The best sleep of your life for a reasonable cost all shipped to your door. Rolled tightly and made of foam blends rather than traditional wire springs, these mattresses slide out of the box and in a few hours expand to full size.

And now, building on their success, some online-only mattress retailers are trending the other way and setting up shop in brick-and-mortar stores, some in Denver.

And, as you’d expect, doing it with the same nontraditional approach they started with in the online world.

Take online retailer Amerisleep, which is opening its first Denver area store at the Park Meadows mall in Lone Tree on Saturday, June 23. There, customers can enter “Dream Suites” where they can nap in private for as long as they want while trying out one of five mattress models.

“One of the most frequent questions I get (from customers) is, ‘Is there a store I can go and try out one of your mattresses?’ ” said Joey Holt, co-founder of Amerisleep, which also has stores in Austin, Texas, and Arizona’s major cities.

People spend about a third of their life sleeping, so testing a mattress before purchase is paramount to many customers.

“Eighty percent of mattresses are still sold in stores,” Holt said. “Stores allow people to have those in-person conversations and create relationships that you can’t create online.”

Denver offers Amerisleep and other online mattress companies a large customer base as one of the nation’s second most rested states.

“Denver aligns with our three pillars: sleep, exercise, and nutrition. Colorado is the second most rested state, the least obese, and has some of the healthiest restaurants in the country,” said Holt.

The decision to partner with furniture stores and open their own brick-and-mortar locations goes largely against the grain as many other industries struggle to compete with online retailers and are investing more resources into online marketing and sales.

Physical store fronts and on-site locations have the added benefit of bringing in walk-in traffic and driving awareness that wouldn’t exist otherwise.

Other online mattress companies like Leesa, Boll and Branch and Casper also are beginning to establish physical footprints, wanting to catch some of that foot traffic and also to provide the opportunity for customers to grab a catnap.

Casper has a store in Cherry Creek mall, one of its 18 locations throughout the country, that also allows customers to try out their mattresses and catch a few z’s in the privacy of their makeshift bedrooms.

Leesa is also in Cherry Creek mall. The company has partnered with West Elm furniture store, opting to sell its mattresses in an established retail space.

Later this summer, Amerisleep plans to open another a location in Cherry Creek alongside Casper and Leesa.

“Furniture is an aesthetic that people want to touch, feel, and sit on,” said David Wolfe, CEO and co-founder of Leesa. “Our West Elm partnership gives customers the knowledge that if they want to try a mattress, they can.”

As mavericks who upended the traditional mattress-selling business model, it’s not surprising that Wolfe and Holt have a different perspective from those selling traditional brands.

“Many traditional mattress stores made it very difficult to differentiate between mattresses,” Wolfe said. “We give people the opportunity to research and shop from the comfort of their own home, but we’ve picked one partner where they can go and try it in-person. We’re building relationships and building understanding.”

Holt said AmeriSleep was attempting to “elevate the customer experience.”

“Our goal is to redefine how mattresses are purchased and sold in stores,” said Holt. “With the current landscape you either have one or two options or 50 to 75. Trying a mattress in-store can be kind of awkward. Our approach is much more customer focused.”