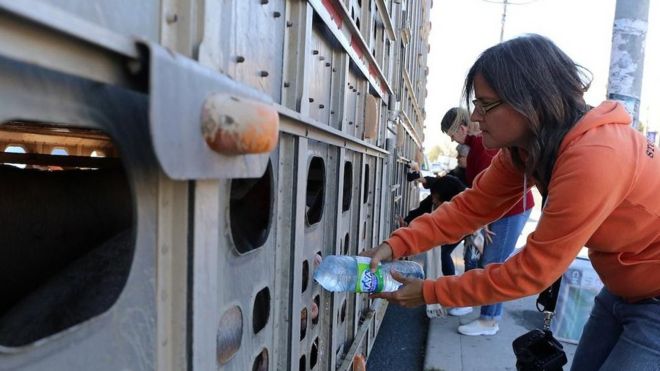 A Canadian activist who faced time behind bars for giving water to pigs has been found not guilty.

Judge David Harris said he was not convinced that Ms Krajnc obstructed the use of property when she gave water to pigs headed to slaughter.

Ms Krajnc said it confirms “compassion is not a crime”.

Mischief to property is a criminal offence in Canada related to the wilful destruction or damage of property.

Justice Harris wrote in his decision that he is satisfied that Ms Krajnc “did not obstruct, interrupt or interfere with the lawful use, enjoyment or operation of any property” when in July 2015, she gave water to a few animals being carried in a tractor trailer filled with 190 pigs going to a slaughterhouse outside Toronto.

Ms Krajnc, who co-founded an organisation called Toronto Pig Save in 2011, regularly gathered with other activists on a traffic island at an intersection near a large slaughterhouse to pet the animals and give them water.

But this time, the truck driver confronted Ms Krajnc and police were called. A video of the tense encounter was posted online by the activists.

During her trial, supporters crammed into the courtroom, many sitting on the floor. Members of the media sat in the prisoner’s box.

Despite her win on Thursday, Ms Krajnc told the BBC she has “mixed feelings” about the decision.

“We were hoping for recognition in the legal system that pigs and other animals are simply not property – that they are sentient beings, that they have basic rights,” she said.

In his decision, Justice Harris noted that under Canadian law, pigs are property.

“Ms Krajnc and like-minded individuals may believe otherwise and they are fully entitled to that belief. That does not however make it so,” he wrote.

Ms Krajnc’s case and her efforts to “hold vigil” for animals headed to slaughter have caught on with animal rights activists around the world.

A number of similar “Save” campaigns have cropped up globally, including dozens in the UK. The movement promotes veganism, animal rights activism, and “bearing witness” to the suffering of animals.

Jenny Canham helped create the Essex Pig save chapter and told the BBC she was “really relieved” by Thursday’s court decision.

She said her group will continue to advocate for animal welfare and to spread the movement in the UK.

Ms Krajnc said she will continue to organise “vigils” near slaughterhouses.