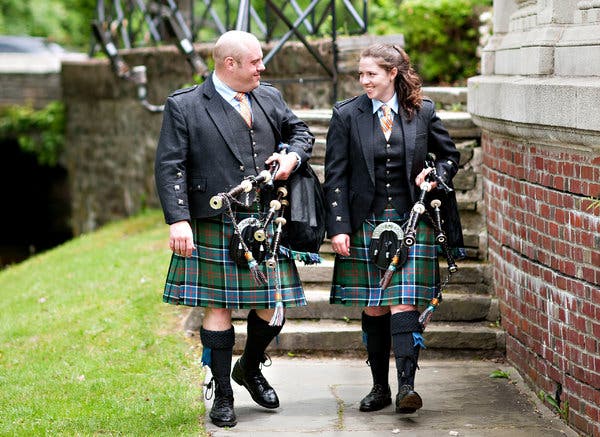 Brigid Ann Blakeslee and Jared Harris Otto, who have both played bagpipes since they were children, met in August 2015 when she contacted him about potentially joining the Manchester Pipe Band, a competitive group for which he was then the pipe major.

He immediately suggested that she join the band for a competition the following month, but she had another commitment and so instead he invited her to practice with the group. Both said they felt an instant connection when they met in person.

“His care and concern for others was immediately evident to me, just from those first conversations,” she said. “He’s very generous with himself, and with others, sharing himself and his time. As I was getting back into piping, he spent a lot of time helping me get up to speed.”

Mr. Otto said he was interested in Ms. Blakeslee right off, but was hesitant to initiate a relationship with someone in the band.

As they got to know each other over the ensuing months, however, they found themselves spending hours talking after band practice.

“It was kind of a slow-burn situation,” Mr. Otto said. “It was really clear around January that something was going to happen sooner or later between us.”

Around St. Patrick’s Day, after a performance at the parade in Hartford, Ms. Blakeslee invited Mr. Otto to dinner.

The couple still disagrees as to whether that was their first date, but the next time they went out, there was no question.

The couple shared their first kiss after that second dinner, and, perhaps even more significant for Ms. Blakeslee, they held hands that night for the first time. As members of a pipe band watch the movement of the pipe major’s fingers much as members of orchestra watch the conductor’s baton, she had developed a special appreciation for his hands, and told him so that night.

“He can help me feel grounded and calm and happy like nobody else, and that really makes him different,” she said. “Everything lined up so perfectly between our common interest and shared background. It felt like more than fate, this unbelievable meant-to-be thing.”