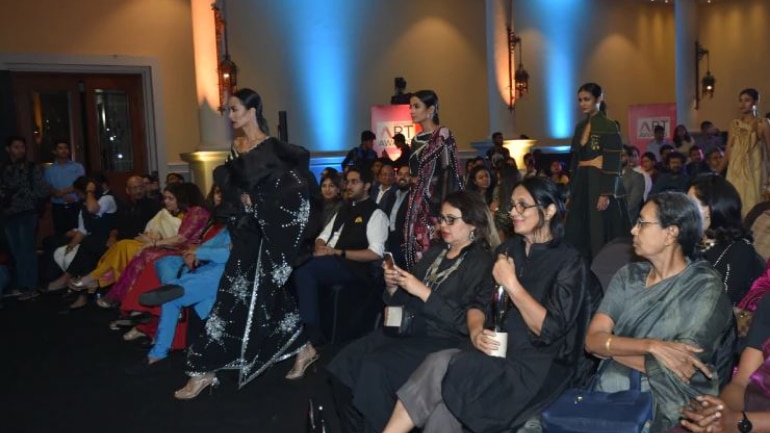 t was not just the art that enlivened the atmosphere at the event held at Swabhumi’s newly-opened space, The Verandah, in Kolkata.

Art and its inherent influence on design was brought to the forefront with Fashion Meets Art’, a fashion show that saw 12 designers create pieces inspired by art, exclusively for the fourth edition of the India Today Art Awards.

Designer duo Abraham and Thakore (A&T) and Samant Chauhan found their inspiration from Nasreen Mohamedi and Delhi-based artist Vibha Galhotra respectively. While A&T were inspired by Mohamedi’s minimalist line-based drawings and chose to represent them on garments, Chauhan was struck by the environmental chord in Galhotra’s work.

Humanity’s interference with our environment is what Vibha works with, and I have tried to depict that with my design, said Chauhan.

The conflicting emotions of despair and hope, and the duality of both in Vincent Van Gogh’s Starry Night’ was what Anavila Misra hoped to capture. If you look at the stars… they look so hopeful, mentioned Misra.

Designer Rahul Mishra was inspired by Dutch graphic artist MC Escher and the elements of playfulness in his work. Rimzim Dadu and Suneet Varma chose surrealist Salvador Dali as their muse. Dadu, who is known for using different materials, constructed a piece with steel wires that gave it a mouldable yet definitive structure. Suneet Verma was less literal in his expression. Dali was a surrealist.

His art makes you think, he said. Gaurav Gupta was struck by the infinite nature in French artist Claude Monet’s work. There is a sense of infinity to his brush strokes depicting water and sky, he commented.

Much like his thinking on what good art should do, with my garments I hope to initiate an intimate encounter with the wearer, stated Mitra.

WHILE many chose specific artists and their work, some designers decided to pay a tribute to folk art forms. Shantanu and Nikhil used the traditional technique of phulkari. We have always been inspired by facets of India but in a modern way, said the duo. Their long line cape with exaggerated sleeves showed off the embroidery in a stylish way.

Designers Shivan and Narresh were inspired by the Gond tribal art; its depiction of birds and beasts was shown off in an edgily-draped sari.

Pankaj and Nidhi were inspired by origami that they interpreted through a minimalistic black piece. The evening ended with a spectacular performance by Omaggio Performing Company, directed and choreographed by Tino Sanchez who presented Jalika, a contemporary dance piece involving dance, mime, theatre, and aerial movements that was based on the struggle between identity and image, and journey of self-discovery.

Must we mention this was a perfect end, as it summed up the very essence of the evening art and the journey it leads one to.