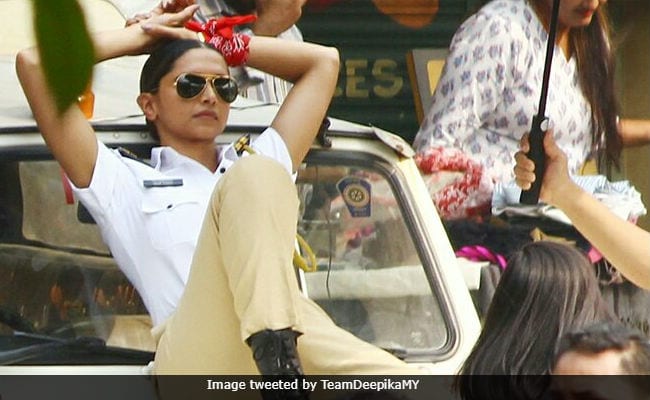 Deepika Padukone was spotted shooting for an advertisement in Mumbai, in which she was dressed as a cop – a welcome departure from her ethnic outfits and heavy jewellery during outings and promotions. We loved that too but a change is always good. And look at how superb Deepika looks in fitted khaki trousers and crisp white shirt with her hair tied in an elegant back bun. Also just saying, her rumoured boyfriend Ranveer Singh’s cop look in upcoming film Simmba has got nothing on Deepika’s swag. What say? Fan clubs posted pictures of Deepika Padukone dressed as cop relaxing on the bonnet of a jeep.

Deepika Padukone is currently awaiting the release of Padmaavat, which is directed by Sanjay Leela Bhansali. The film’s original release date was December 1 last year, but due to the Central Board Of Film Certification’s delay, the film will now release on January 25. Padmaavat, which was originally titled Padmavati, was cleared for release with a U/A certificate and five alterations including the title.

The film’s new release date was formally announced over the weekend and the film’s lead cast – Deepika Padukone, Ranveer Singh and Shahid Kapoor – also posted revised posters of the film on their respective social media accounts. However, a source told mid-day that Padmaavat producers want to keep the trio away from media interactions “to avoid controversy.” The source added: “Also, the cast members are busy with other commitments.”