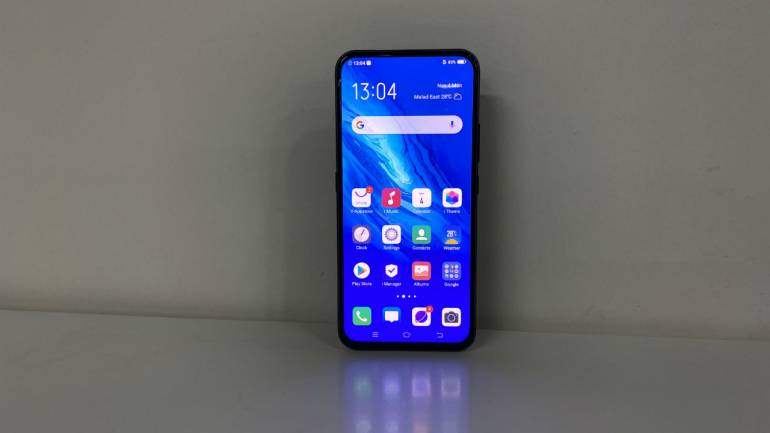 Chinese smartphone manufacturer Vivo has been right at the front when it comes to innovations in the smartphone space. From dual-front cameras to pop-up selfie cameras, Vivo has tried to offer something new in its every new smartphone.

You might have heard of smartphones featuring a pop-up camera with a single lens for selfies. Vivo has upped the game by launching the V17 Pro with a dual-front pop-up camera. Not just the front, the V17 Pro is also Vivo’s first smartphone to house four cameras at the back.

Will a six-camera setup be a deciding factor for consumers to buy the Vivo V17 Pro? Read our review to find out.

Typically, our reviews begin with the look and feel of the smartphone. With the V17 Pro, we decided to begin our review with its highlight feature, the six cameras. The rear panel houses four sensors offering a versatile set of focal lengths, whereas the front has dual-cameras with ‘moonlight’ flash.

Let’s start with the rear cameras. The vertically-aligned quad-cameras on the back feature a 48MP f/1.8 primary sensor, an 8MP f/2.2 ultra-wide sensor, a 13MP telephoto lens with 2x optical zoom, and a 2MP depth sensor. The camera UI includes various modes like Photo, video, portrait, night, etc. There’s also a toggle that allows you to switch between the primary and telephoto lens. The camera settings can be changed by tapping on the ‘settings’ icon on the top right of the camera UI.

The photos are mostly Instagram-ready, meaning a bump in saturation levels. The saturation can get aggressive at times, resulting in the colours not looking natural. One thing we noticed is that the camera software pops up the blue colours a lot. Take, for instance, this image where the sky looks like as if it was painted with pastel colours.

After an update, the colour-tone and saturation levels seem to have adjusted. The contrast levels, too, looked just fine. During daylight, the dynamic range is very good, and the camera captures a lot of details. However, zoom into the shots, and you’ll notice some noise.

The zoom lens does a decent job when there is a fair amount of light. During such conditions, the 2x telephoto camera produces excellent photos with some right amount of detail. However, we found the contrast to be a bit on the higher side in some cases, resulting in deeper blacks in darker areas.

The 13MP ultra-wide sensor creates visualising appealing images. The camera is capable of clicking pictures up to 120-degrees wide. Do not expect a lot of details, especially along the edges. We also noticed some noise while hunting for more details as we zoomed into the clicked images.

There’s also a Night mode on the V17 Pro. The camera takes a couple of seconds, if not more, to shoot images trying to get maximum details possible. A few shots we clicked using the night mode resulted in soft images with a bump in the exposure. What we also didn’t like is that the night sky had a lot of noise. Here are some pictures of firecrackers clicked during the Diwali night. Try to notice the loss of detail and softness on the edges.

For selfies, the V17 Pro has a 32MP primary sensor and an 8MP ultra-wide sensor with a pop-up mechanism. Typically, many Vivo phones tend to soften the skin and pop up the tone a shade or two higher. In case of the V17 Pro, the softening is a bit less aggressive. There’s also night mode for the front camera but don’t expect it to do wonders. It basically lights up the face while reducing the noise levels.

We didn’t find the Portrait mode any different from the ‘Photo’ mode while clicking selfies. However, upon selecting the ‘Bokeh Mode’, we were able to click selfies with background blur. Vivo needs to work on edge detection in the V17 Pro. Notice the ears and hair getting blurred at the edges. 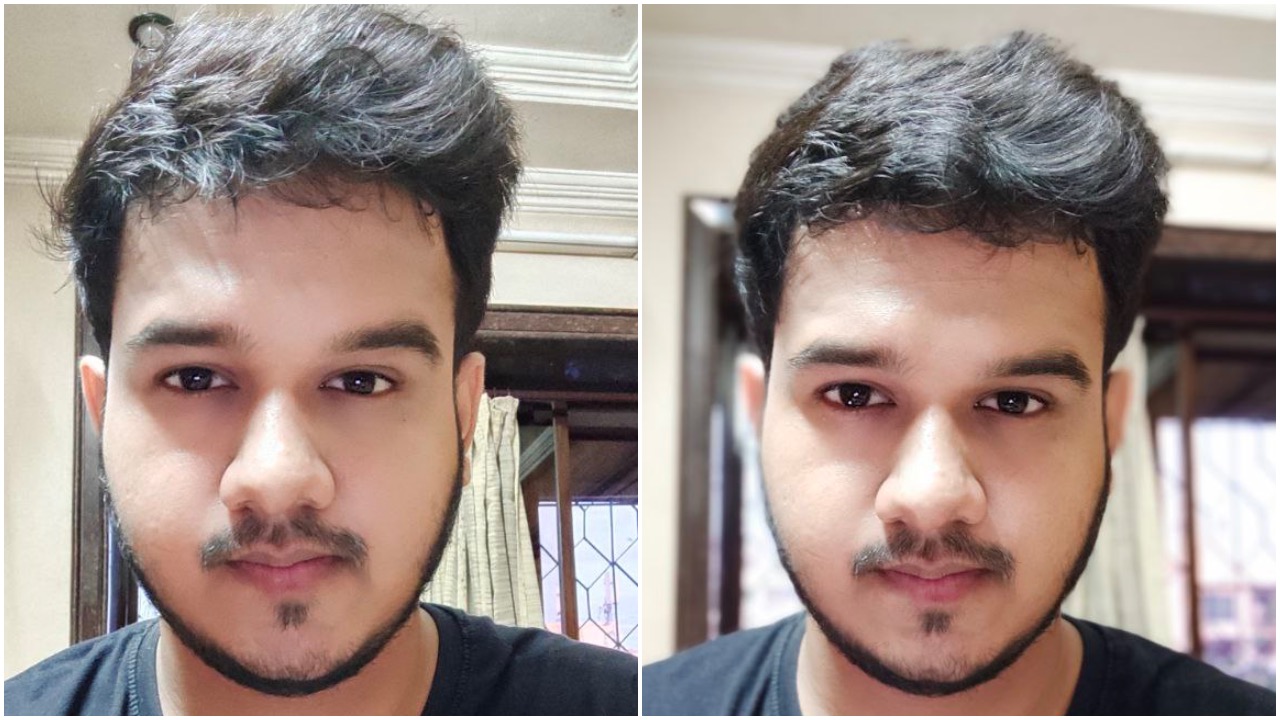 The front camera also supports ultra-wide mode selfies, and we would not recommend using it for low-light selfies.

The V17 Pro comes in an all-screen look, which is becoming mainstream in this segment. The 6.44-inch display has a 1080 x 2340 resolution and comes with a WideVine L1 certificate. There are slim bezels on the sides, with the chin being marginally thicker.

The Super AMOLED display offers a good amount of brightness, and you would not have any trouble when using the V17 Pro outdoors. The screen is sharp and offers good saturation levels. 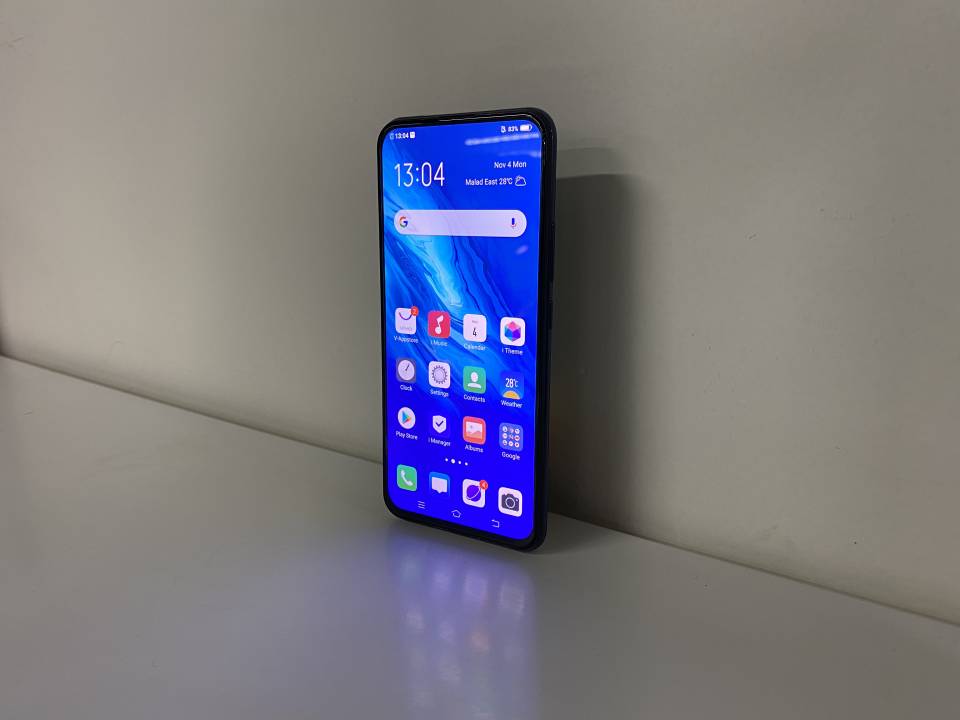 You also wouldn’t most likely have a problem holding the smartphone cause the 20:9 aspect ratio seems to strike a good balance between size and usability. The sides, however, are a bit slippery, and we would recommend using a case. In case if you still drop the device, chances are the Corning Gorilla Glass 6 can save the display from cracks and scratches.

Flip the V17 Pro around, and you’ll see that vertically aligned quad-camera setup on the Gorilla Glass 6 black. The Midnight Ocean-coloured back is a fingerprint magnet, and another reason to use a case. The LED flash has been positioned in the centre of the camera module. 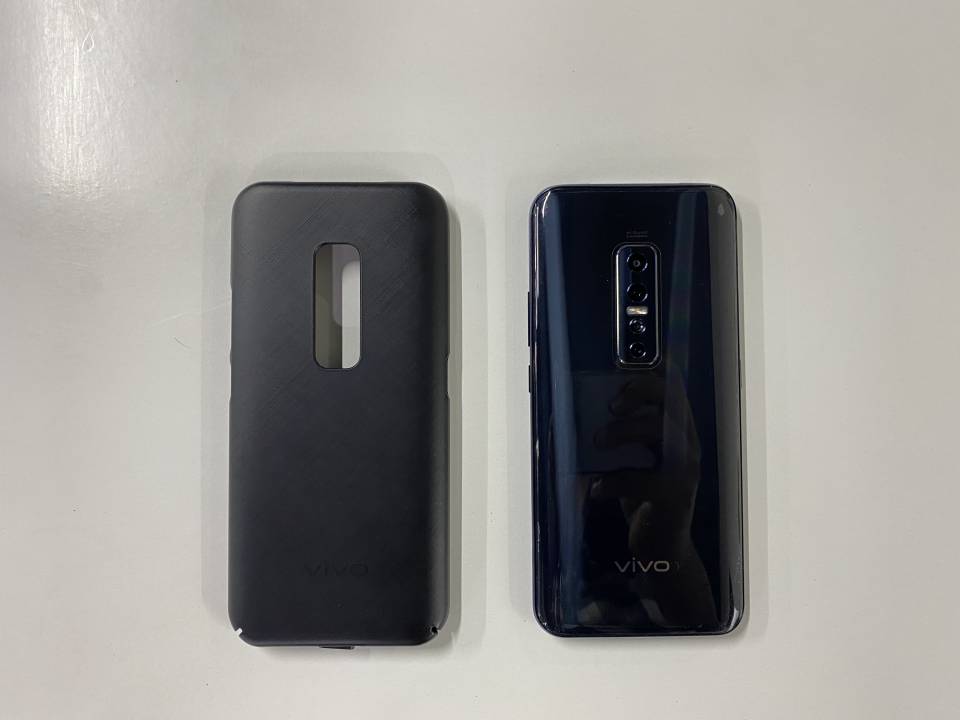 On the left edge, there’s a Google Assistant button that also doubles up as Vivo’S Jovi Image Search with a double press. On the right, you have the power and volume buttons which should be reachable for even smaller hands.

At the bottom edge, there’s a USB Type-C port between the SIM-tray and a single speaker-grille. There’s a 3.5mm headphone jack placed on the top edge, right next to the dual pop-up front camera. The earpiece above the display does double up as a secondary speaker but is as-good-as nothing as the sound is quite muffled.

The spec sheet of the V17 Pro may seem slightly underwhelming, mainly due to the processor used. A Qualcomm Snapdragon 675 SoC with 8GB RAM powers the V17 Pro. The performance isn’t slow, but for the price, you get a lot powerful Snapdragon 855 SoC on the Redmi K20 Pro and the OnePlus 7.

When it comes to day-to-day tasks by browsing the web, switching between apps, the V17 Pro performs quite well. The lack of an efficient mediocre processor is realised while gaming where you experience some amount of lag. We played some PUBG matches and the game loaded ‘High’ graphics. Within 10 minutes of Classic match gameplay, the phone started getting warm.

The V17 Pro comes with an ultra-game mode which customises and tweaks some settings for an improved gaming experience.

The battery backup is considerably better on the V17 Pro. The 4,100 mAh battery managed to give us more than a day’s backup based on moderate usage. To power-up the battery, there’s support for 18W dual-engine fast charging, which takes roughly two hours to charge the phone entirely from 0 to 100 percent.

Users can also setup face unlock, which will only activate after the fingerprint does not match three times. We had to scan an unregistered fingerprint to check the speed of face unlock, and it turned out to be quick enough.

On the software front, the V17 Pro boots on Android 9 based Funtouch OS 9.1 out-of-the-box. The custom skin may seem to have taken inspiration on iOS, minus the bloatware.

Vivo’s FunTouch OS comes with a bunch of preloaded apps like Gaana, Amazon, PhonePe, Zomato, WhatsApp, apart from the essential Google family of apps. The custom skin comes with some features like Motorbike Mode, which rejects calls when riding. There’s also a ‘Smart Scene’ which shows information about the cricket score, weather, to-do list, etc. Do check our Vivo Z1Pro Review to get more details about our experience with Funtouch OS.

The V17 Pro loads some good hardware on paper, but when it comes to practical usage, there’s room for some improvement. With six lenses that offer versatile focal lengths, the V17 Pro is a capable camera-centric smartphone provided the software gets polished.

The design’s good but there’s nothing stunning about it. A glass back does give a better feel and isn’t prone to a lot of smudges either.

The biggest complaint we have about the V17 Pro is its performance unit. Under Rs 30,000, the Redmi K20 Pro and the OnePlus 7 offer a faster and more efficient Qualcomm Snapdragon 855+. The software, too, isn’t something everyone may like and Vivo needs to double down on the bloatware.

It is hard to recommend this phone, considering Vivo’s past reputation with the Z1Pro and the Z1X that offer much better value-for-money proposition.

Under Rs 30,000, the Pixel 3a (Review), with its price cut, offers a far better camera output with lesser cameras.

If you are into gaming, the Redmi K20 Pro (Review) and OnePlus 7 offers a lot more superior hardware and are definitely a better deal over the V17 Pro. The upcoming Realme X2 Pro also looks promising on paper, but we’d wait and recommend the flagship device only after reviewing it.