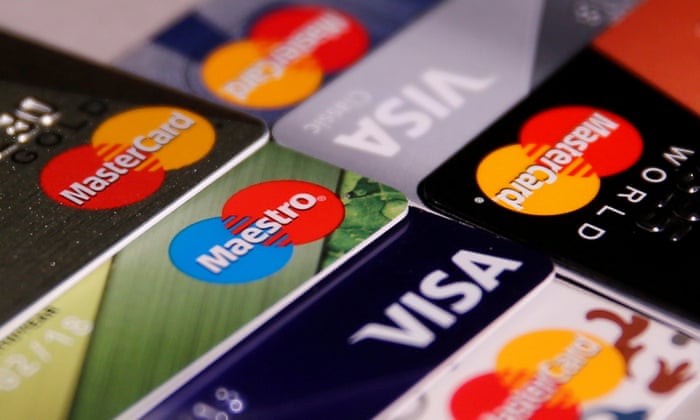 Britain’s hard-pressed consumers are increasingly turning to credit cards, overdrafts and loans to support their spending, according to the Bank of England.

Threadneedle Street’s monthly report on money and credit found that the outstanding amount of unsecured consumer credit rose by 10.3% in the year to May, five times as fast as the growth rate of earnings.

The size of the increase is likely to add to the Bank’s concerns flagged up earlier this week about the precarious financial position of many individuals, and led some City analysts to speculate that it would encourage Threadneedle Street to try to rein in consumer borrowing with an increase in interest rates.

With the City detecting that the Bank is edging closer to its first increase in borrowing costs since the start of the financial crisis a decade ago, sterling briefly rose above $1.30 on the foreign exchanges to its highest level since the general election three weeks ago.

The data came as Andrew Bailey, the chief executive of the Financial Conduct Authority, said his organisation wanted to find out what was happening in the car loan market, a crucial component of the consumer credit sector. Annual growth in car financing has been averaging 20% since 2012.

Bailey said he had held discussions with the US authorities about car loans, because the UK market may bare some of the hallmarks of the business model used for selling vehicles on the other side of the Atlantic.

Speaking in London, Bailey said: “What’s going on here? Does it mean there are more cars or the form of financing has changed? I think it’s something to do with the latter rather than the former,” he said.

Bailey said his hunch was that the market had undergone a structural change. “It has become more like the US, more of a secured finance market than it was in the past,” he said.

Regulators need to know if consumers will prioritise paying back a car loan before other forms of unsecured lending, such as credit cards or personal loans.

The FCA is concerned about a lack of transparency, potential conflicts of interest and irresponsible lending in the motor finance industry and after its review will decide whether it needs to take action to curtail the explosive growth.

Most of the growth has been fuelled by personal contract plans, which can start at less than £100 a month and with only a £100 deposit. Buyers never actually purchase the car, but make payments to cover the depreciation on a vehicle between driving it out of the showroom and handing it back, usually three years later.

Data released by the Bank provided evidence of a slowdown in the housing market, with lending secured against a home rising by 2.9% to £1.338tn in the 12 months to May.

Unsecured consumer credit continued to grow strongly and rose by £1.7bn during May alone, faster than its average of £1.5bn in the previous six months.

Credit card borrowing is growing at an annual rate of 9.1% while other loans and advances rose by 10.9%.

Howard Archer, the chief economic adviser to the EY Item Club, said: “It may be that the heightened squeeze on consumer purchasing power is increasing the need for some consumers to borrow.

“The Bank of England will be far from happy with the May consumer credit data, and it could bolster the case for a near-term interest rate hike to try to curb consumers’ readiness to borrow.”

The latest income tracker from the supermarket chain Asda found that the spending power of UK households had fallen by 1.9% over the past year, the sharpest decline in four years.

Asda said families had average discretionary income of £194 in May, £4 a week lower than in the same month last year. Families with the lowest incomes saw the biggest reduction in disposable income.

Living standards have been squeezed in recent months because the fall in the value of sterling since last year’s EU referendum, which has pushed annual inflation to 2.9% while earnings have been rising at 2.1%.

Ruth Gregory, the UK economist at Capital Economics, said the Bank of England’s data suggested that households remained confident enough to increase borrowing to help smooth consumption in the face of the squeeze on their real incomes.

“Of course, this will do nothing to allay policymakers’ concerns about the recent rapid increases in unsecured lending and strengthens the case for the financialpolicy committee to act to address this issue at its next meeting in September,” she said.