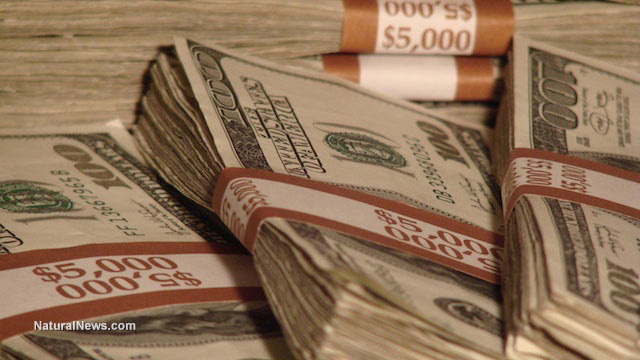 As we predicted, the cash crisis in America is beginning, and the occasion has been marked by a recent announcement from one of the country’s largest banks. Beginning May 1, JPMorgan Chase will begin charging certain (wealthy) depositors for the “right” to keep their money in JPMorgan Chase banks.

As noted by GovtSlaves.info, the bank sent some of its larger depositors a letter that said it would charge them a “balance sheet utilization fee” of 1 percent annually on deposits in excess of the money they require for operations. In other words, that amounts to a negative interest rate on many of those deposits.

“The targeted customers – mostly other financial institutions – are already snatching their money out of the bank,” Bloomberg News reports, adding that this is “exactly what Chief Executive Officer Jamie Dimon wants. The goal is to shed $100 billion in deposits, and he’s about 20 percent of the way there so far.”

Pay for the “privilege” of depositing cash

Peter Coy, writing for Bloomberg News, urged readers to “pause for a second” to “marvel at how strange this is.” Historically, banks have always paid interest to depositors; it was a reward, of sorts, to depositors by the banks for the use of depositors’ money to make loans and conduct additional financial business that enabled the bank to make money.

Now, however, keeping huge amounts of cash on hand is apparently no longer seen as good business. Large financial institutions like JPMorgan Chase are shunning cash unless customers “are willing to pay for the privilege” of depositing it, Coy wrote.

“Nick Bunker, a policy analyst at the Washington Center for Equitable Growth, was so dazzled by interest rates’ falling into negative territory that he headlined his analysis after a Doors song, Break on Through (to the Other Side),” noted Coy.

Negative interest rates have become much more commonplace in cash-strapped Europe, where a number of socialistic governments facing hard economic times (too little economic growth versus too much outgo in the form of generous public benefits) have had their central banks cut interest payments to below zero.

In fact, the European Central Bank itself, which is struggling to spark economic growth throughout the continent, has a deposit rate of -0.2 percent.

The Swiss National Bank, meanwhile, has a much lower deposit interest rate of -0.75 percent amid worries that the Swiss franc will disrupt trade. On April 21, Coy reported, the cost for banks to borrow from each other in euros went negative for the first time.

As of April 17, bonds making up 31 percent of the value of the Bloomberg Eurozone Sovereign Bond Index – €1.8 trillion ($1.93 trillion) worth – were trading with negative yields.

How do you want to run your society?

“Although dollar interest rates are higher, JPMorgan Chase’s balance sheet utilization fee fits the pattern: In today’s low-rate world, the only way it can shed deposits in response to new regulations is to go all the way to less than zero,” said Coy.

What’s the bottom line? Coy and others believe that there is at least some effort to completely devalue paper currency and make all money “virtual”, which can then be controlled by the government through its control over the financial sector – remember theDodd-Frank financial “reform” measure of 2010?

“The anonymity of paper money is liberating,” Stephen Cecchetti, a professor at Brandeis International Business School and former economic adviser to the Bank for International Settlements in Basel, Switzerland, told Coy. “The bottom line is, you have to decide how you want to run your society.”

Most Americans likely believe our founders have already solved the problem of “how we want to run our society.” It is supposed to begin and end with individual liberty, and nowhere is that more evident than in the freedom to live free (or as free as possible) from government control.

The federal government already regulates virtually every aspect of our lives; regulating our money is the final step toward complete control.