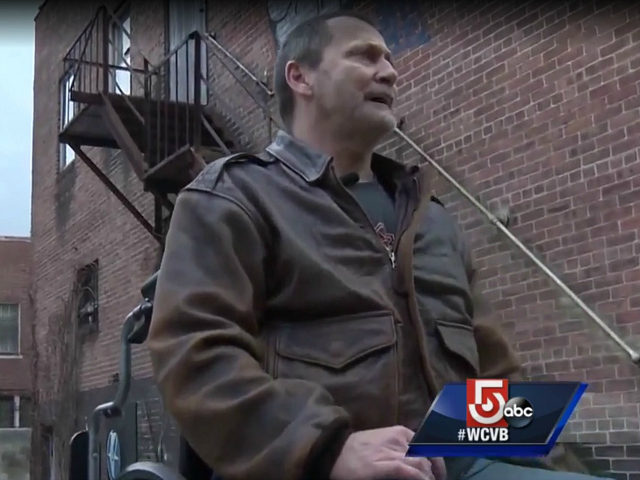 Police found a man who is a double amputee crawling up the street in the rain Friday morning in Massachusetts after two men robbed him of his wheelchair and his money.

The victim, 52-year-old Steven Otis, said that he was traveling down a sidewalk in Brockton at the time of the attack, CBS Boston reported.

“I was coming up the sidewalk, one hit the back of my head. One took my wallet and one took my wheelchair,” said Otis. Otis said, after the men knocked him down and ran off with his wheelchair, he lay on the ground before he started crawling on his arms down the sidewalk.

He made it halfway up the street and called 911 before police found him 100 feet away from where his wheelchair was reportedly stolen. “I wasn’t gonna stay there it was far easier to crawl up the street to get away cause you don’t know if they’re coming back,” said Otis.

Officer Daniel MacIntosh responded to the incident after taking care of a call nearby in the parking lot behind the Elmcourt Hotel, WCVB reported.

“As he exited his cruiser, he could hear a man screaming for help,” Police Lt. William Hallisey said. “He found a man crawling on the ground.”

Police did not find any suspects right away, but a firefighter found Otis’s wheelchair in an abandoned lot nearby.

Otis is a resident of the Elmcourt Hotel and has been disabled since a fall five years ago forced doctors to amputate both of his legs.

Police are reviewing surveillance footage to see if they can identify any suspects and are investigating it as an unarmed robbery.