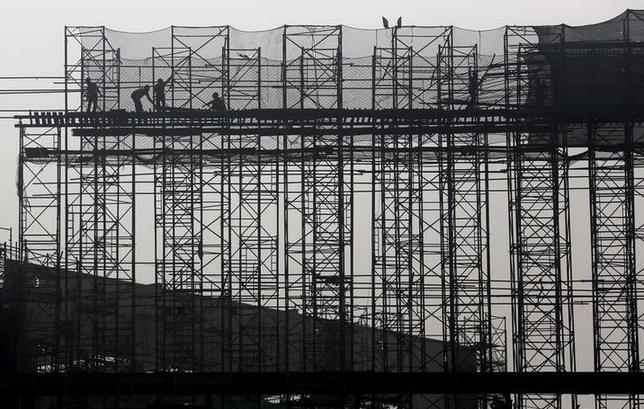 Labourers work at the construction site of a commercial complex on the outskirts of Kolkata, India, January 29, 2016.
REUTERS/RUPAK DE CHOWDHURI/FILES

India’s economic growth slowed in the last quarter of 2015, adding to pressure on Prime Minister Narendra Modi’s government to expedite stalled reforms in the next session of parliament when it presents its annual budget.

Gross domestic product grew an annual 7.3 percent in the October-December quarter, government data showed on Monday, less than an upwardly revised 7.7 percent in July-September but in line with the forecast in a Reuters poll of economists.

That rate of growth was faster than the 6.8 percent posted by China in the same quarter, although many economists say the official data continues to overstate the economy’s strength. They point weak exports, railway freight, cement production, investment and flat order books as evidence of weakness.

New Delhi also forecast that GDP growth for fiscal year 2015-16 would accelerate to 7.6 percent from a revised 7.2 percent a year earlier. For that forecast to materialise, however, the economy would have to grow at a rate of 7.8 percent in the three months through March.

Worryingly for Finance Minister Arun Jaitley, who unveils his budget at the end of February, nominal growth — which drives tax revenues — is weakening because of the global commodities slump. That will make it harder to contain the government’s borrowing needs.

India’s GDP data has been under scrutiny since last January when statisticians unveiled new methodology they say better captures value addition in the goods and services supply chain.

The new readings transformed the lumbering South Asian giant overnight into one of the fastest growing major economies.

Monday’s data did little to put those doubts to rest and if anything, raised further questions about its accuracy.

Economic growth for the April-June quarter, for example, was surprisingly marked up to 7.6 percent from a provisional 7 percent reported earlier.

Annual manufacturing growth of 12.6 percent in the December quarter contrasted with other indicators — such as corporate order books, inventory ratios and factory capacity utilisation — that all pointed to weakening momentum.

Asia’s third-largest economy is widely viewed as a beacon of stability in an uncertain global economy, with weaker commodity prices helping to cool India’s inflation and improve its fiscal and external balances.

But Modi’s struggle to win bipartisan support in parliament for long-pending land, labour, bank and tax reforms has begun to take a toll on investor confidence.

India’s benchmark BSE stock index hit an all-time high last March on hopes of speedier reforms but now has given up nearly all those gains.

With no signs yet of a rapprochement between the ruling Bharatiya Janata Party (BJP) and the opposition Congress party, the parliamentary session that begins on Feb. 23 is not expected to be very productive.

That puts the focus on Jaitley’s third annual budget on Feb. 29, which is expected to include measures to address rural distress and boost investment.

But worryingly for Jaitley, nominal GDP is forecast to grow 8.6 percent in fiscal year 2015-16 compared with 10.8 percent a year before. The slowdown is likely to add fuel to an ongoing debate within the government over whether to hike borrowing and spending to stimulate sluggish demand.

Economists say the sharp slowdown in nominal GDP is largely due to falling wholesale prices, which have a bigger weight than retail prices in the GDP “deflator” used by the government to strip out price changes to make quarters comparable.