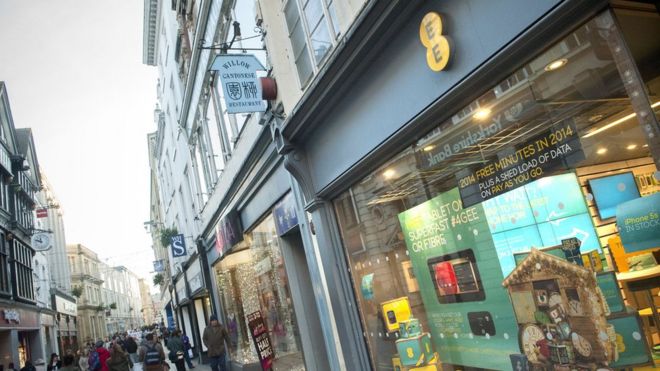 Mobile operator EE has been fined £2.7m by the telecoms regulator, Ofcom, for overcharging tens of thousands of customers.

The watchdog found that the UK’s biggest mobile network broke a billing rule on two occasions.

Users who called its 150 customer services number while roaming within the EU were incorrectly charged as if they had called the US.

That meant customers were charged £1.20 a minute, rather than 19p.

Lindsey Fussell, Ofcom’s consumer group director, told the BBC: “We all rely on big companies to get the most basic things right, and that includes charging the right bills… we uncovered a catalogue of errors.”

The fine will go to the Treasury.

Asked whether fining companies worked, Ms Fussell said: “We think that it’s a significant fine and that they are a good deterrent.”

EE said it accepted the findings and apologised unreservedly to customers affected.

Most customers have been refunded, although EE could not identify at least 6,900 who were more than £60,000 out of pocket.

EE has donated about £62,000 to charity in lieu of this sum, but Ofcom has ordered the company to make further attempts to trace and refund every customer who was overcharged.

Shekhar Raj Dhain, an EE customer, said he was incorrectly billed last year by the mobile operator, which BT took over last year.

“I rang three times about this and in the end was exasperated and quite disgusted. Eventually they credited back the difference – after ranting, which I shouldn’t have to – and gave me £20 compensation. It’s left a sour taste,” he said.

Current and former customers who believe they have been overcharged can contact EE on 0800 956 6000.

The regulator found the mobile operator had misled more than 10,000 pay-as-you-go customers, charging them for top-up credit but “providing nothing in return”, and had broken the rules on handling customer complaints.