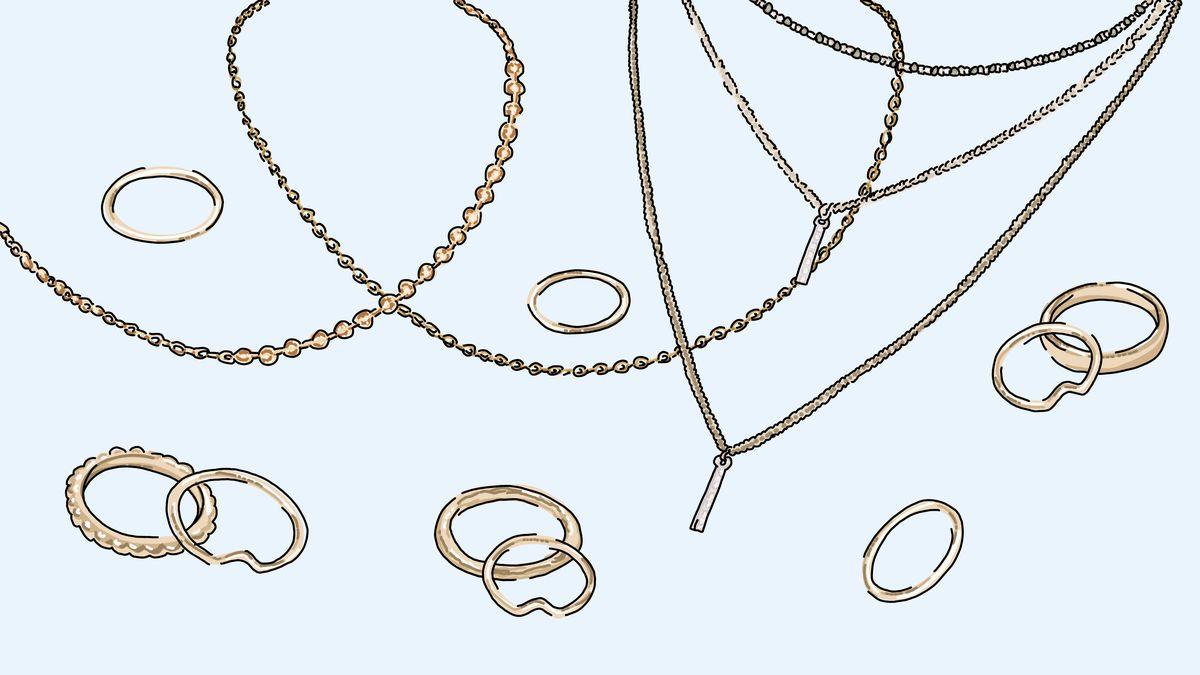 You’re supposed to imagine that everything is already broken, at least according to Buddhist monk Ajahn Chah. One of his most popular teachings was that understanding that everything will eventually break, our bodies included, leads to true appreciation for the precious, limited time we have with our belongings and each other.

But I was not being philosophical when I was in line at Forever 21, holding $42.92 worth of jewelry that, I knew, wouldn’t last long. The delicate necklaces would tarnish. The cubic zirconia wouldn’t sparkle as brightly once it wasn’t under the store’s specific lighting, and the stacking rings would turn my fingers green. I knew this jewelry didn’t have longevity but, that day, I didn’t care. I was shopping for something to wear to my father’s funeral.

That’s how I’d ended up at the Westfield Topanga mall in Los Angeles, methodically combing through Zara like a Roomba for black clothing. I was trying on 15 items, all of which were black, and wondered if the sales associate knew I was shopping for my father’s funeral.

In the unforgiving light of the dressing room, the weight of deciding among 15 pieces of black clothing crashed down on me. Being alive means making choices, like whether to buy a black dress or black skirt or black pants for your father’s funeral. And knowing my father’s choices were done being made, forever written in stone, made this mundane choice about what to wear feel insurmountable.

I did what one does when one doesn’t want to make a simple decision: I checked my phone. My childhood friend had texted to ask why I was flying back home. I wrote that my dad had passed away due to health complications, on my birthday, which was two days prior. She replied, “Hahaha, he WOULD die on your birthday!”

The thing is, he would. My father and I had a strained relationship and his dying on my birthday (though logically I knew he had no control over his own death) felt pointed, like a very last practical joke that I’d always be too sensitive to find funny. And that text, irreverent as it was, felt like a warm hug from a friend who knew me well. Everyone else had sent texts of condolences and gentle words, but she was familiar enough to respond with something real, no cliché words about sending love and light. The text made me laugh until I cried. And then I was sobbing in a dressing room with 15 items of black clothing and, at this point, the sales associate had to know I was shopping for a funeral.

In the past few years, I’ve mostly stopped shopping at malls. Instead I opt for buying secondhand clothing via apps or browsing online stores that offer sustainable options. I’d like to write about my consumer saintliness, chalking my shopping patterns up to being conscious about environmental pollution or concerned about the unethical treatment of workers. And those are things that, of course, worry and bother me, but the real determining factor for my shift away from fast fashion has been admittedly more self-involved.

I grew up in a working-class family to whom clothing was to be consumed more so than owned — bought cheaply, worn roughly, and disposed of when aptly used. Fast-forward to my watching a convincing documentary or two and reading a few dozen informative articles. Now I view articles of clothing as financial investments. Instead of buying a skirt from, say, H&M for $29.99, the better investment is a used designer skirt, even if it costs twice as much.

Not only will a designer skirt likely last longer, but because it’s designer, I can resell it after years of use, occasionally even pocketing a profit as if I’m getting paid to wear designer clothing for three years. In a perfect world, my closet would reach a stasis in which it’s a rotation of selling my clothing in order to buy new used clothing and never investing any more money into my closet.

No matter how good my shopping intentions are, however, there are moments in which I don’t have the time to scour apps or thrift stores — you know, like when I have to catch a flight to my hometown for my father’s funeral. I couldn’t compute the delicate questions that buying secondhand often prompts, like what if it didn’t fit and would it need to be altered. And therein lies the appeal of fast fashion: It may not be built to last, but it’s built ready to wear and requires very little thought other than, “Does this look cute?”

I could have left the mall after buying the black dress, but malls have always been my favorite place to be sad or confused or frustrated. When I wanted to change my college major, when my boyfriend dumped me, when my childhood pet was put down, to the mall I went. The comfort of the mall is in the contradictions. Malls are homey but sterile, make you feel inadequate but optimistic; you’re alone but surrounded. Inside a mall, you exist between the reality of who you are and the fiction of who you could be. Also, you can get a pretzel with cheese sauce, a haircut, a palm reading, and a massage. It’s almost like malls are specifically designed to cater to sad people.

I SACRIFICED CHEAP JEWELRY TO MY PAIN PRECISELY BECAUSE IT WAS DISPOSABLE. IT’D BE ONE LESS THING I’D OWN THAT MADE ME SAD.

I wandered the mall for so long that my phone died and I charged it in an outlet I found in the hallway to the public restrooms. I was, at this point, one with the mall. And across the way, Forever 21 called to me like a siren in a crop top. I immediately gravitated to the shiny jewelry display in the middle of the store, like an infant attracted to the most sparkly thing. And then somehow, like a fever dream, I had a fistful of bracelets and rings and was waiting in line to pay for it all.

I knew, even as I inserted my credit card, the fate of the jewelry: it would be disposed of. But that was the point. Had I not bought this jewelry, I would have worn the pearls I had inherited when my grandmother passed away, the same pearls I wore to most fancy-ish occasions, and then they’d inevitably become the pearls I wore to my father’s funeral, forever stained with pain. Every time I’d do the clasp while getting dressed for another friend’s wedding or baby shower, I’d be reminded, subtly but sharply, of my father’s funeral. Instead, I sacrificed cheap jewelry to my pain precisely because it was disposable. It’d be one less thing I’d own that made me sad.

The funeral came and went, seasons changed, and there were new shows to binge-watch, which is all to say that the world went on. I went on, irrevocably changed, but still here. The Forever 21 jewelry, too, was still here. Simply throwing it out felt too irreverent, so I engaged in an elaborate waiting game in which I’d wear the jewelry and hope for it to break.

And it did break — at least, one of the necklaces did — while I was getting drinks with a friend. It was lovely to have bought jewelry that alleviated me of my ownership, that did exactly what I had bought it to do.

This is not to celebrate the expendability of fast fashion, but rather to suggest that there are a few rare times in one’s life when an item’s expendability is its most valuable quality, when you actually rely on it falling apart. In every logical way, that fistful of Forever 21 jewelry was basically worthless. But grief doesn’t deal in logic. When you’re in the thick of mourning the loss of a loved one, there is great worth in a sparkly item’s ability to deliver fleeting joy into your life, and then, as if on command, disappear forever.