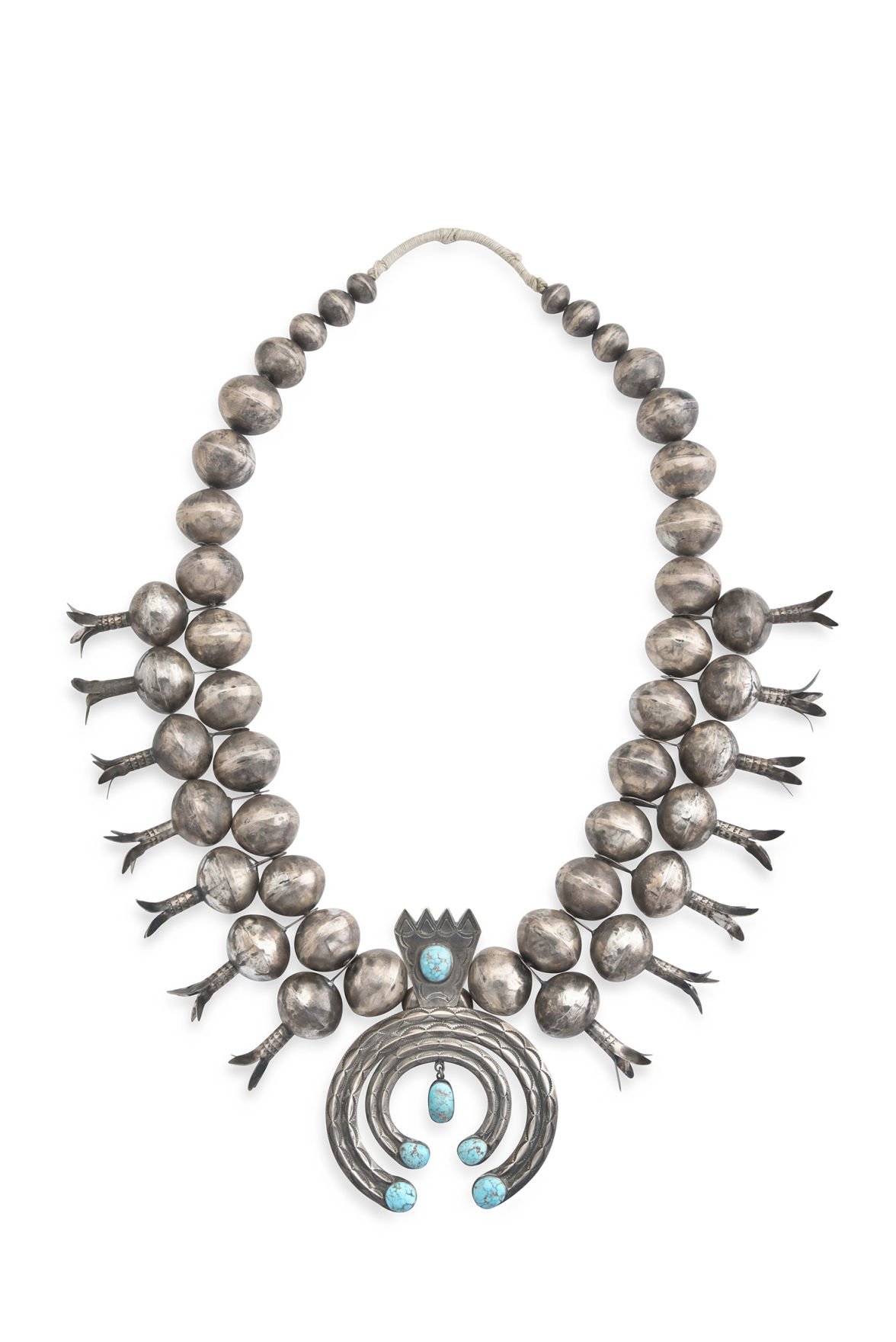 The phrase “New Mexican jewelry” tends to have specific connotations: turquoise and silver. While these are certainly essential features of the New Mexican jewelry tradition, they are hardly the only ones. As any New Mexico resident knows, our state is an amalgam of cultures and traditions, both indigenous and imported. The artistic productions that have emerged from that commingling of cultures are as diverse as the people who live here.

Hence the title of an exhibition that opened in June at the Albuquerque Museum: American Jewelry From New Mexico. The exhibition does not limit itself to showcasing “New Mexican jewelry” as that phrase connotes, but rather expands the conception of regional jewelry to include a much wider range of styles. The introductory wall text explains, “Rather than focus on a single culture group, individual, artist, time period, or medium, American Jewelry From New Mexico tells the stories of diverse heritages simultaneously, as artists live in concert, trade, and adaptation with their neighbors.” Tradition is honored here, as is creativity that pushes past the norms or creates new ones.

That creativity is evident initially in the exhibition in several ancient works, many of them Puebloan. These early works demonstrate artistry spanning materials and styles, from a Basketmaker necklace composed of gastropod shells (circa 400 BCE-100 CE) to a dragonfly pendant made of goethite, from Pueblo Alto at Chaco Canyon (1020-1150 CE). Though the exhibition follows a general chronological arrangement, accompanying wall texts focus not on the steps of history but on the evolution of innovation. In these early works, trade routes between tribes influenced the materials used in the crafting of adornments. When those routes were disrupted by Spanish colonization, new exchanges occurred, as did new jewelry practices.

Causal patterns of contact and creativity reached something of an artistic apex in the 19th century, when there was a fusion of Hispanic silversmithing traditions with Native jewelry making. For the Diné, the results were structural pieces — among them cuffs, rings, and manta pins — of silver and turquoise, the silver often stamped. Zuni jewelers, the wall text notes, frequently used the metal principally as a setting, a foundation for presenting colorful stones. The representative works on display include a bolo tie, by Leo Poblano, of an eagle dancer mid-step, arms raised, with jet stone, mother-of-pearl, and coral composing his ceremonial attire (circa 1940s). Both the Diné and the Zuni used silver in their creation of squash blossom necklaces, typically with a central naja crescent and blossom ornaments along the chain.

If these works are quintessential New Mexican jewelry, their presentation here makes clear that, while they fit within that categorization, they assert individual ingenuity. In one case of squash blossom necklaces, we see a consistency of overall shape but wide variations in sizes, stones, and component symbols. Nearby cases have silver-based concha belts, from the 1870s to the 2010s, of Zia birds, butterflies, and even mouse traps, with a mouse-head buckle (Squeak by Bob Haozous, Warm Springs Chiricahua, circa 2003).

In the last few decades, regional jewelry making has seen a surge of experimentation, and it is in the final sections of the exhibition that things get delightfully weird. Santa Fean Lawrence Baca’s Knife, Fork & Spoon Necklace (2001) has a chain featuring ovals stamped with eating utensils, culminating in a central cross made of a vertical knife and a horizontal half-spoon, half-fork: the trinity of consumption. Diné artist Clarence Lee adorned a silver bracelet with a pickup truck following and being trailed by dogs; a turquoise stone represents water in the barrel the truck is carrying (circa 1997). In Where’s Oz? (2018), Albuquerque artist Goldie Garcia embellishes a glittery necklace and earrings with poppy-like fabric flowers, whose centers are bottle caps featuring characters from The Wizard of Oz.

The modern pieces, like those earliest in the exhibition, are materially innovative, from Debra Baxter’s brass knuckles crowned with aqua aura quartz (2017) to Kristin Diener’s New Orleans and Alabama/Mississippi Gulf Coast Love Story: Loss and Lament: Fertility Reliquary II (2005), a reliquary that sits upon a mannequin as though it were a chastity belt. The piece’s 23 materials include toy scissors, a Route 66 guitar pick, a candy wrapper, and vintage nude photographs. (Baxter and Diener live in Santa Fe and Albuquerque, respectively; both are from the Midwest.)

Amid the progressive definitions of jewelry in the exhibition’s modern section, there is also tremendous craftsmanship and sheer beauty in many of the works, emphasizing jewelry’s fundamental aesthetic role. (Wall texts also discuss its commercial role: the jeweler as, often unavoidably, businessperson and brand.) Works by designers and jewelers such as Rémy Rotenier, Lonnie Schroder, Paula Crevoshay, and Keri Ataumbi exhibit intricate detailing with elegant gemwork. Even as the exhibition encourages deeper consideration of materiality, creativity, and the very concept of what it means to be a New Mexican artist, those thoughts might get put on hold at the sight of another shining jewel.