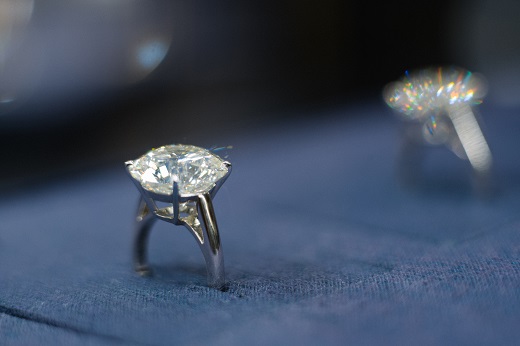 RAPAPORT… De Beers has restated its estimation of global diamond-jewelry sales following a new study valuing the diamond content in jewelry purchases since the 2008 recession. The group also revised its production data to reflect lower output than previously believed, stemming from an overestimation of the artisanal mining sector.

Global diamond jewelry demand rose 2.4% to $76 billion in 2018, driven by growth in the US and China, De Beers said in its annual Diamond Insight Report published last week. However, that figure was below the $82 billion it had originally reported for 2017, as the company gained new insight relating to the elements that are included when valuing jewelry, De Beers explained.

The company revised its estimation for 2009 to 2018 following studies it conducted with retailers relating to the content of diamond-jewelry purchases and the structure of the trade, as well as its “Diamond Acquisition Study” with consumers. The revised figures reflect mainly the value of sales in the US, and are more consistent with the total jewelry retail value stated by the US Commerce Department, De Beers noted. The government agency last year revised down its estimation of US jewelry retail sales.

De Beers maintained its assessment of global polished-diamond demand, which saw a 2% rise to $25.3 billion for 2018, a figure that is included in the jewelry sales total. That suggests there was an overestimation of other elements contributing to the overall jewelry value, such as the value of the metal used, a company representative explained.

De Beers used third-party researchers to obtain information from retailers about their diamond sales, including the description of the diamond, the metal used and the full breakdown of the piece. From that information, the company calculated the price per carat of the diamonds and was therefore able to understand the value of the diamond content and the proportion of the total for which it accounts.

“The study revealed that the share of the polished wholesale value in the overall jewelry retail value had increased in the US after the financial crisis of 2008,” the company noted in the report. “The adjustments made resulted in a new lower diamond-jewelry market estimate for the US and globally.”

Sales in the US grew 5% to $36 billion in 2018, accounting for 49% of the total, according to the research. In China, consumer demand for diamonds rose 3% in local currency and 5% by dollar value to $10 billion, with growth slowing considerably in the second half of the year when the US-China trade war escalated, De Beers noted. Demand also grew in Japan, buoyed by the appreciation of the yen against the dollar, while the market declined in India and the Gulf.

De Beers observed that consumers were increasingly tending toward smaller center diamonds in their engagement-ring purchases, but with more side stones and accents. Other trends influencing demand included a shift toward branded products, with 36% of diamond engagement rings by volume being branded, compared to 22% five years ago. Greater confidence in online buying is also spurring growth, helping chain stores and prestige brands gain market share at the expense of specialist independents, the report stated.

De Beers expects growth to continue in 2019, supported by macroeconomic fundamentals. However, dissipating fiscal stimulus and rising recession fears could prove to be a drag on growth in the US in 2020, the company cautioned.

Meanwhile, global diamond production in 2018 fell 2.7% to 154 million carats, with its value up an estimated 2.4% to $17.4 billion in 2018, according to De Beers. In last year’s Insight Report, the company said 2017 output stood at 164 million carats valued at $17.5 billion. De Beers lowered its estimation of global rough production  after it commissioned a third-party study of the artisanal mining sector.

“The nature of the informal sector is such that there is less information available to accurately estimate production to a high level of confidence,” a spokesperson explained in an email. “The report concluded that our previous estimates of informal production were likely too high, particularly in the Democratic Republic of the Congo.”

Data from 2019 De Beers Insight report, with Rapaport estimates for percentage growth where it wasn’t provided.