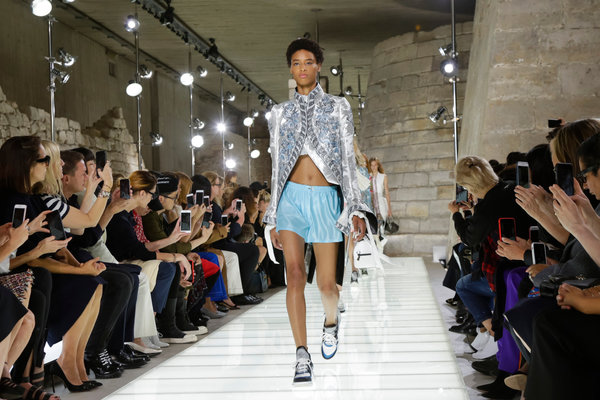 PARIS — The last long walk of fashion month took place on an excavated 12th-century moat by the walls of the medieval castle that formed part of the foundation of the Louvre. An uplit passageway lined with metal stools by the Japanese designer Teruaki Ohashi led inexorably to the Great Sphinx of Tanis at the end of the tunnel. Where the Louis Vuitton show began.

So what riddle required answering?

Not “why are logos back?” (though it’s a legitimate query). Nor “is anyone really expected to wear a turtleneck that turns them into an actual turtle?” (depends on the person). But rather: “What makes fashion meaningful today?”

Or thus asked Nicolas Ghesquière at the end of a punctuation mark of a show. To be specific, he said, standing outside the museum as guests like Jennifer Connelly and Alicia Vikander paid their respects, he was thinking: “Anachronism: How today can we incorporate pieces considered as costume into an everyday wardrobe?” But in its essence he was paraphrasing the question at the heart of the season — which is, to a certain extent, the question at the heart of every season (Another way of thinking of it is as: “What’s the point?”). Against a backdrop of increasingly urgent global trauma and issues much more imperative than what clothes go on your back, however, it has seemed particularly pressing.

And it has inspired, over the course of the four-city circus of ready-to-wear, a variety of responses. Though consensus has been harder to achieve.

Thom Browne, for example, being a proponent of the latter. Making his women’s wear debut in Paris after decamping from New York (he has long shown his men’s wear in the French capital), he created an otherworldly dreamscape of a story to frame an otherworldly collection.

Giant white paper globes hung from the ornate ceiling of the Hotel de Ville, transforming the gilded city hall into an alien universe, as a voice-over from the British children’s show “The Clangers” made observations about Planet Earth, and two spacewomen who looked an awful lot like couture versions of the Michelin Man danced in the aisles. Then the theme song from “The Little Mermaid” came on. And out came an extraordinary array of classic fabrics — seersuckers and golf club madras and houndstooth — rewoven in tulle and reconceived in the attenuated, exaggerated lines of a nighttime reverie.

Waists were dropped to thigh-height and hung from garter belts of Mr. Browne’s signature red, white and blue grosgrain, the better to fool the eye and elongate the proportions. Knits were quilted like puffa jackets and climbed the body to swallow the head like a giant tortoise shell. Skirts floated like islands of shredded tulle under oversized jackets. In the end, a woman in a white long-line corset and bolero jacket appeared, leading a unicorn (O.K.: a giant unicorn puppet.)

“Well, this is what a child’s fantasy might be,” Mr. Browne said backstage. “Mine, too, I guess. That’s what fashion should be.”

Though perhaps not, according to Miuccia Prada, who announced that, with her Miu Miu show, she was more interested in trying to understand “how to make beauty possible in real life, when it isn’t secluded in the museum, or the hotel.” Or — she didn’t add but probably could have — a designer’s head.

So she took sheer lace dresses and layered them over argyle vests and knee socks; added distressed leather bows to the shoulders of lumberjack shirts; mixed up tablecloth prints and ’70s plaids; spackled Crombie-style coats with dangling diadems. And, most pointedly (though she claimed not consciously), cast the most diverse lineup of the week, with more than half her models being non-Caucasian. Welcome to Main Street.

At least in the hands of Mr. Ghesquière such thesis and antithesis finally reached a kind of synthesis via elaborate reinventions of 18th-century French and British frock coats — in silver and gold brocade, in leather, in assorted florals (he and his team had done some research at the Metropolitan Museum of Art) — paired with silk boxer shorts and patent-leather jeans, tossed on over “Stranger Things” T-shirts and sneakers. Oh, this old Louis XIV thing? I wear it to the gym every day.

Ditto stiff silk-shantung dresses, buttoned tight to the torso and belling out over the hips, that were layered over striped leotard tops; and two twinkling white tank dresses webbed with clear crystals and worn over derivations of silver sequined sports bras.

Combining the historically elaborate and the technically aerobic is not a new idea — Mr. Ghesquière has explored the same territory before, in his Balenciaga years, and Alexander McQueen did, too — but this time around it had a polish and momentum (most looks were shown with sneakers) that had currency.

The peacocking men’s pieces were no longer relics from an archive designed to transport everyone back to the court of the Sun King; the gym wear was no longer waiting for its personal trainer. Both had become equal variables in a wardrobe.

Riddle me this: What happens then?

They become simply “our clothes.”