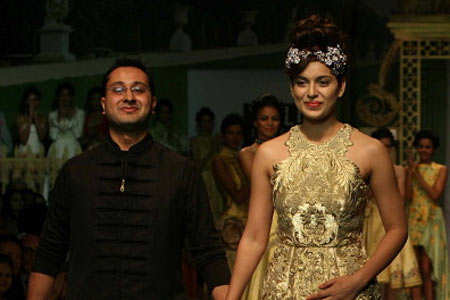 The mannequins were models, their depiction inspired by fairytale characters. Designer Shantanu Goenka depicting stories through his ‘Fashioning Fairytales’ collection showcased during his couture exhibit at 85 Landsdowne.

The highpoint of the exhibit was the way designer presented his clothes through a story enacted well by different mannequins kept in different positions. For the designer, it was a series of curated displays celebrating couture and fantasy.

“We have moved away from regular shows and ramps where the clothes are seen on models. Our show on mannequins is more like a fairytale portraying through the garments,” the satisfied and excited designer told IANS.

“The exhibition explores the possibility of representing fashion through characters like Alice and Sleeping Beauty from the tales that we grew up with, and merging them with fashion, sound, light, art and food to bring this ethereal experience,A” he added.

For Goenka, the collection is not only apt for all the would-be brides but also for those looking out for something unique for special occasions.

A”The deigns are not primarily for a bride or the family to incorporate during a wedding, but it could be a part of the trousseau that people wear for other peopleA’s wedding. People are always travelling and they want to make use of their clothes not just for weddings, but keep using them off and on.

“Keeping this in mind, we incorporated separates like capes, jackets, skirts and dresses,A” the designer told IANS.

The colour palette was also different from what we see in normal wedding season.

A”We see a lot of red, yellow and orange in usual weddings, but we are keeping spring and summer in mind for this couture pieces. We have used very soft colours like lilac and lavender, old rose, ivories and beiges.

“ItA’s a very vintage washed out summer palette. There is a lot of layering in the ensembles,A” said Goenka.

The fabrics used by the designer are primarily tulle with soft summer silks.

The designer, whose forte lies in Indian trousseau and bridal wear for women, has used lot of Bengal’s flavour in the pieces too.

A”The collection looks very lacy and vintage like old Bengal. It has British influence on it too with a little bit of orient style,A” he said.