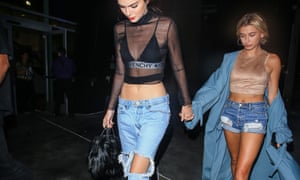 I accidentally tore the knee of my jeans the other day. Looking around, I see a lot of people who appear to have done the same. What’s going on? And, given I have a whole wardrobe of chinos and trousers, might they benefit from the same treatment?

Excellent question, Stephen. I myself have wondered this, given that an unripped pair of jeans these days is about as rare as a decent Ben Affleck film: you know they existed once, surely. Maybe in the 90s? But they have long since vanished, even from memory. A few months ago, I shared the fascinating tale of my purchase of some jeans in Los Angeles, a saga that shall not only win the Pulitzer of Pulitzers, but will be studied by journalism and literature students for centuries to come. No, not studied – WORSHIPPED.

Anyway, one detail I left out of that magnum opus was the difficulty I had in finding a pair of jeans that were intact. In one poncey boutique, a shop assistant confidently handed me a pair. They turned out to be $300, which was already hilarious. Even more intriguingly, they didn’t really exist. Oh sure, there was a denim crotch area (I know, I really have a way with words. Language is poetry and words are my tools), but that was pretty much it. There were seams, so I knew vaguely where to put my legs, but the front of the jeans was ripped away. Entirely. Out of genuine curiosity, I tried them on and, in my denim hotpants and ankle cuffs, I looked like the worst superhero ever conceived and, yes, I am counting Antman. And yet, they cost at least three times as much as a normal pair of jeans. This is just one of the stranger truths about the ripped-jeans trend: the less jeans there are, the more the jeans cost. This same equation, incidentally, can be made about shoes: the strappier the sandal, the higher the price. Honestly, it’s like The Emperor’s New Clothes every day round here, the way some people seem to prefer invisible clothes to actual ones.

A lot has been written about how great jeans are these days: the flattering fits! The soft material! The variety of washes! Never mind your golden age of TV, we are living through the golden age of denim. What a time to be alive! And yet, this golden age has birthed some of the more unflattering trends ever inflicted upon denim – and bear in mind I was alive in the 80s.

There’s “feathering”, for example –which jeans manufacturers love to boast about – which refers to the white lines across the tops of jeans legs, acting as “look here” arrows towards your crotch (yup, I used “crotch” twice in one column, and that’s why they pay for my words round here). Feathering is what happens when denim has been overused and overextended. Think of it as stretchmarks for your jeans. Who pays for stretchmarks? That is not a rhetorical question – I gave birth to twins less than a year ago, so I’d be happy to sell some of mine.

Then there’s ripped denim. I’ve tried to understand the mentality behind this look. Is it saying: “I’m so wild I tore my jeans moshing last night at 3am and I’m so cool I didn’t even notice”? Is it: “I know I spent $300 on jeans but I’m actually really hard-working – you know, like those old guys in whiskey adverts. I keep it real”? Or perhaps it is: “I suffer terrible hot flushes so need constant ventilation”?

I honestly don’t know, and, doubtless, ripped designer jeans will be seen in years to come as embarrassing a trend as Ugg boots and flash mobile phone cases are now. In the meantime, yes, I fully endorse your idea of ripping up your chinos, because it will simultaneously mock the ripped-jeans trend and ruin your chinos. Win-win from my perspective.

You wrote about the burkini ban last week. This led me to wonder if there is any item of woman’s clothing that is not in some way controversial?

No! Well, controversial to men, anyway. Men love to email me to say that ACTUALLY it’s women who judge other women’s clothes just as ACTUALLY the burkini is totally oppressive to women and ACTUALLY women do feminism all wrong, so thank God they are here to save us all. I used to think men who claimed women must wear high heels to be sexy were bad enough. But these days, I find men who talk loftily about how sad it is that some women “feel they have to wear high heels” even worse. Flat-out sexism is definitely preferable to this kind of sexist condescension in the guise of sympathy.

Anyway, just as a general summation, here is a selection of comments men have made to me and my friends about our clothes over the years:

“Your skirt’s too short.”

“Your skirt’s too long – you fundamentalist or something?”

“Your heels are too high.”

“Flat shoes are so unflattering on women.”

“I hate when women wear makeup.”

“I love lipstick on a woman.”

“One-piece bathing suits are so frumpy.”

“You’re showing too much cleavage.”

So there we go! I think we all know what the moral of this story is, right? Women – tchuh! They just never get it right.