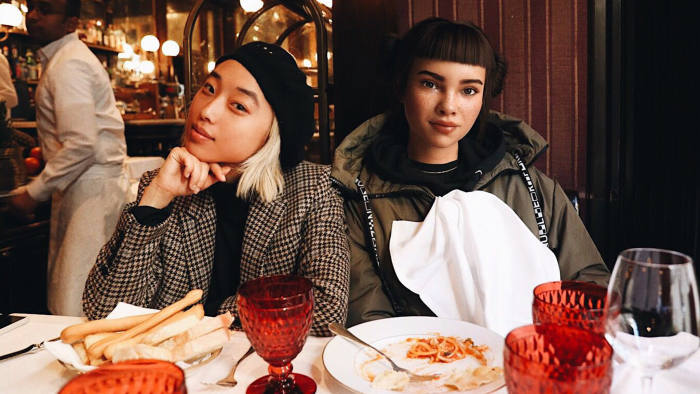 Miquela, or “Lil Miquela”, is a freckled, fresh-faced singer, fashion influencer, model and activist. In two years, she has accrued a following of 1m Instagram followers. Her Spotify page has had millions of song streams and she is granted backstage access to exclusive events. Recently she showed her followers around the Prada AW18 show space by flying a drone around the venue. She has also starred on the front cover of King Kong magazine showing off a bare and rather perky posterior. The thing that sets her apart? She doesn’t really exist.

Miquela is an avatar. But when first scrolling through Miquela’s Instagram page she could easily pass off as a real person: she wears the latest designer labels, attends fashion dinners and book signings and enjoys spaghetti lunches with her friends. It’s only on closer inspection you start to notice the strange homogeneity about her features — the too immaculately shiny smooth and brightened skin, facial symmetry and the hair, always in the same style, two buns with a straight uniform fringe with never a strand out of place. She’s just a little too perfect.

Her provenance is mysterious. Is she modelled on a real person? Who controls her? And from where did she come? Industry insiders suggest that Miquela is the product of a team effort, but precious little else is known about her. Her privacy is very closely guarded.

In a world where we are now saturated with “fake news” and ever advancing technologies Miquela represents an industry in the throes of its own identity crisis. Commentators argue over the validity of her social media influence. Others see her as the future of fashion, the vision of a landscape where we no longer need “real” people to sell us things any more.

Earlier this week Miquela’s Instagram page was hacked by another virtual influencer named @bermudaisbae. The rival avatar deleted all of Miquela’s images declaring Miquela as fake: “You brought this on yourself girl. Soon there will be no lies and everything will be revealed.” During the feud, followers of Miquela took to Twitter and YouTube to debate the unfolding events. Was this all a stunt? Miquela has now regained full control over her Instagram page and deleted all posts from the hack. She has yet to comment on the events.

Miquela engages with her audience constantly but is now opening up in interviews about herself and what she stands for. Via email, she discussed some of the questions regarding the ever-growing force that is “Lil Miquela”. And the things that inspire her.

Where are you from?

I’m a 19-year-old from Downey, California.

Why do you think your Instagram persona has become so successful?

I think people initially come to my page because my look is interesting. I share music, style and political interests and I hope people take away something informational or inspirational.

Who or what is your greatest source of inspiration?

Definitely my friends and living in LA! Every day I’m creating new relationships and experiences.

You tackle a lot of social causes and political issues on your feed. You organised a transgender awareness dinner last month and have a link to the Black Lives Matter donate site in your bio. Why is it important to you to promote these causes?

I’ve been lucky enough to have a good following and I want to share causes I am passionate about! Many times these cases don’t get a lot of media attention so I try and push their reach a little further.

You are very involved with your virtual following and community. Why?

I’m really engaged because I’ve made so many meaningful relationships through Instagram. I’ve had such positive responses and comments to my posts and stories. I have been able to work with some of my fashion idols and travel to new exciting places all because of those interactions.

Would you describe yourself as a feminist?

Definitely! We are living in an exciting time where gender equality is being questioned and women are expressing their concerns, using their voice and being heard. Change is happening.

You’ve said in previous interviews that you make money from your music on Spotify and your modelling jobs. Which fashion brands have you worked with?

I’ve been lucky enough to work with brands I admire and respect. Prada, Pat McGrath and Proenza Schouler are a few and I’m still pinching myself. A year ago I would have never imagined this.

Miquela did not respond to this question

You said in a recent interview that you will be doing modelling work, can you expand on this?

I’ve had the opportunity to be featured in some amazing editorials and I hope that continues. Working with top photographers and stylists has been such an amazing experience.

You release music on Spotify and iTunes that have received a great response, do you plan on going on tour?

I would love to go on tour! Nothing is planned at the moment, but I want to meet my fans and see the world.

Which music artist would you love to collaborate with the most?

My number one artist I would love to do anything with is Rihanna. I don’t even have to collaborate with her, I’m fine with sitting within 100 feet of her!