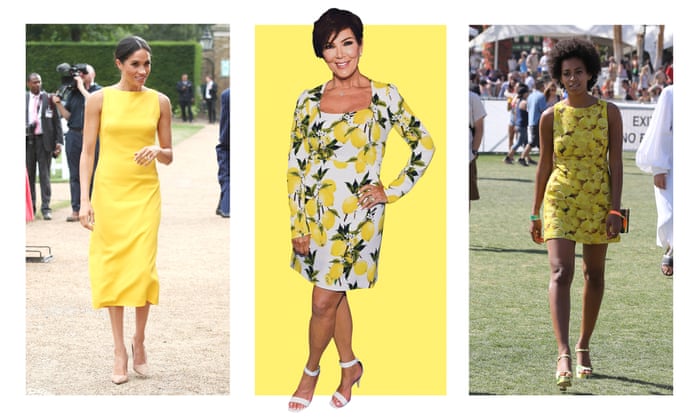 She might not know it, but Hattie White, Jay-Z’s grandmother, was the instigator of this summer’s juiciest trend. Her 90th birthday speech is broadcast on Beyoncé’s Lemonade (you’ll know the bit even if you haven’t ever listened to the album). “I was served lemons,” she says, “but I made lemonade.”

Two years on from those immortal words #whenlifegivesyoulemons has been used more than 160,000 times on Instagram, and spawned a thousand memes. The lemon emoji, meanwhile, has almost three million hashtags. Beyoncé was – as ever – early on the trend. Keen to make her album a 360 experience, fans could buy a baseball cap with a lemon on it for her 2017 tour, and it’s still available online. The lemon has since blossomed. Forget florals or palm fronds, fruits are the print to wear in 2018, and lemons are the pick of the bunch.

You’ll find them on swimsuits at Matchesfashion and dresses at Asos. Lemon earrings are a thing at Accessorize, Jacquemus and boutique brands including Wolf & Moon. They add zing to any outfit (they will also start conversations, so be warned – don’t wear if you are not keen for a chat at the bus stop). Lemons on T-shirts work, too – Ganni’s Murphy, which features a lemon, was an influencer favourite. It is sold out but you can find similar versions at Topshop and Missguided (FYI early adopters: Ganni has moved on to the banana). Celebrities have also taken to impersonating the fruit – the Duchesses of Cambridge and Sussex have worn shift dresses the colour of limoncello over the past week, a confident hit of serotonin for public engagements.

If summer 2017 was tropical – pineapples and palms – this year has shifted. The alpha lemon to have printed on your dress – or artfully arranged on a bleached wood table on your social media post – is the Sorrento lemon, native to Italy. It hails from the Amalfi Coast, and comes unwaxed with organic-looking nobbles and bobbles and, ideally, a couple of leaves still attached (smooth GM-style fruits aren’t really reading the room).

There’s a sort of timeless, universal appeal to the lemon print in the summer, one that feels instant, friendly and inclusive rather than in-the-know like, say, slogan or band T-shirts. They have been an everyday motif in art for centuries – in paintings from 17th-century Dutch still lives, to Picasso’s abstractions in the 1930s, Roy Lichtenstein’s pop lemons and even the 1989 Stone Roses album, a John Squire take on a Jackson Pollock.

In a world where the visual gag is king, perhaps the thinking is that wearing nature’s bounty on your person provides almost as many vitamins as eating it. Citrus fruit seem to win, perhaps due to innate zestiness – they have been everywhere from Stella McCartney’s lemon, lime and orange prints in 2011 , to JW Anderson’s cult lemon polo shirt last year. A similar design is now at H&M for £8.99.

It makes sense, perhaps, that when it comes to designers, Dolce & Gabbana really own the lemon trend. They are geographically closest to the Amalfi Coast, after all. The Italian duo produced a collection based on the mercato ortofrutticolo – that’s Italian for farmer’s market, but you knew that – including tomatoes, courgette flowers and chillies in 2012. Lemons have emerged as a favourite though. A whole collection appeared in 2016. Last year, they released a jewellery campaign shot in a lemon orchard. As with most things with the Italian label, the vibes here are sex kitten off-duty – Sophia Loren cooking up spaghetti al limone, or Brigitte Bardot visiting Picasso at his studio in 1956. 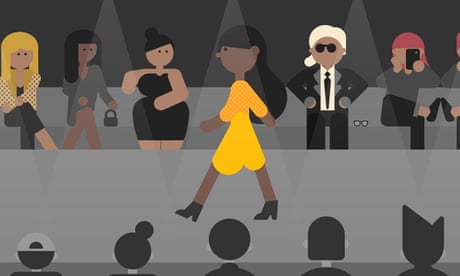 Your wardrobe this summer, then, sits in the Venn diagram of the Beyoncé effect, Sophia and Brigitte’s looks and the classicism of those still lifes. Earrings have a pop impact that means they can carry the rest of your outfit. An off-the-shoulder blouse such as the one at Tu is an easy way to add a bit of the Amalfi Coast to the less picturesque environs of, say, a suburban BBQ. A lemon dress – as everyone from Solange Knowles to Kris Jenner knows – turns up the summer occasion just a notch. The other option, of course, is to turn it up to 11 by wearing full lemon yellow like a duchess. Kate’s is – of course – from Dolce & Gabbana. Find yours at Warehouse for £39 and say a little thank you to Hattie White when you wear it. After all, life gave her lemons, and she gave us the lemon trend