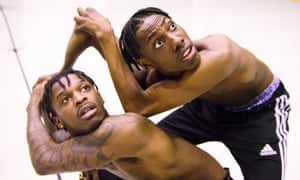 The reflection in the mirror shows a wiry body tightly tensed, with a tattooed chest and hair tied up in two afro bunches. He lifts his shoulder and starts to twist it almost out of its socket, muscles knobbling and bulging, until it looks like something extraterrestrial.

This is not a freak show, but a dance. Called “bone-breaking”, it’s one of the more wince-inducing moves in the family of flexing, New York’s latest street dance craze, an offshoot of Jamaican dancehall that’s been bubbling up from the streets of Brooklyn over the past decade and is now staking its claim as a stage art. Bone-breaking, pausing, get low, gliding, connecting, hat tricks and punchline: these are the terms I’m getting to know. I ask Reggie “Regg Roc” Gray, one of the dance’s pioneers, what punchline is. “A really extravagant movement that nobody would ever think of doing,” he says. “I have a friend, Jay, who’ll do really big tricks, like jump off a second-floor building and do a back flip. That ends the show.” That does sound like quite a show-stopper.

Gray is in the UK to spread the flexing love to Manchester, where he’s masterminding a show for the international festival called FlexN Manchester, a coming together of 10 Brooklyn flex dancers and 10 local street dancers performing at the Old Granada Studios.

The dancers are warming up for rehearsals, the morning after a Friday night out. Fuelled by Kit Kats and camaraderie, they start with a gentle groove to a reggae rhythm, get tangled up in some fast footwork, and break off into pairs to work out routines. The style originated from dancehall’s bruk-up (meaning “broken-up”), its rubbery bodies and facial expressions now expanded to something more complex. There might be jolting torsos and thumping steps interrupting the flow, as well as pausing, which looks like an electrical current pulsing through the body, and gliding – think moonwalk 2.0.

There’s a sense of family in the room, what with all the laughing, joshing, sharing steps and teaching each other. For Gray, flexing has always been about community. He started dancing at school, battling in the dining hall, and used to go to parties every Saturday at the home of a couple called Rocky and Sandra Cummings, who created a talent show, and later a cable TV show, called Flex N Brooklyn. “They let hundreds of people into their home,” says Gray. “Sandra used to cook for us, spaghetti and Kool-Aid. It’s always been a big circle of people coming together, making a change and doing something for the youth.”

The Brooklynites are keen to emphasise that this is a culture separate to hip-hop. It has its own DJs and music (based on reggae rhythms – or riddims), and label-loving fashion style, as well as its own slang. There’s the word “modd”, meaning something great or over the top (in a good way), and its superlative form, “zodd”.

For Gray, this all started as somewhere to go and hang out on a Saturday, but it turned into something much more significant. “I was real quiet,” he says. “I was always shy, this nerdy kid. And it brought me out. I was changing from fitting in to standing out.” Nurturing the flexing community has since become his life, bringing him a successful career. As well as running events all over Brooklyn, in March Gray co-created a show with opera maverick Peter Sellars at New York’s Park Avenue Armoury (where MIF boss Alex Poots is also artistic director).

The local dancers taking part in FlexN Manchester were all flown out to the Armoury show for what was their first taste of flexing. “Whoa, I had never seen anything like it before,” says 23-year-old Jack Bain from Sale. They were instantly welcomed into the community. “We’d only seen them for a day and they were, ‘Yo, the UK family!’”

But then it was down to work – and flexing has asked more of the Manchester dancers than they are used to. There are the usual aches and bruises involved in any physical challenge but, at its heart, flex is a dance that’s all about expression and storytelling, creating characters and using mime-like movements to outline specific situations. In rehearsals, I watch a courtroom scene unfold, with only a few chairs for props, but a clear narrative emerges. “It’s about driving the emotion out of them and letting them understand it’s more than just dance,” says Gray. “You gotta tap into a place you’ve never gone before – you gotta go to a place where you’re almost vulnerable.”

Paola “Flo” Nyembo, one of the Manchester crew, laughs and says: “Regg is always screaming at us, ‘More! More!’ I know the emotion I’m trying to give, but Regg will be like, ‘It’s not reading.’ I’ve been thinking I’m giving 100%, but I’m not at all.”

“He scrapes everything from the barrel,” says Dale Coleridge, aka Goodsoul. “He doesn’t want anything left – it’s all out on the floor. Yesterday, doing my solo, I literally had to go outside because I was going to pass out. Regg was screaming at me. I’m like, ‘There’s nothing left!’”

In my solo, I went outside because I was going to pass out. Regg was screaming at me. I’m like, ‘There’s nothing left!’

It sounds brutal but it’s been a revelation for the dancers, the self-expression proving highly cathartic. “Dancers can be the life of the party and all that,” says Bain, “but a lot of us are reclusive, and the things that go on in our head we don’t necessarily vocalise. But we do want to say it, and this is a great way to learn how to get it out.” In fact, if you’ve ever seen a dance show and wondered what the dancers were trying to say, flexing might be your thing. As Bain puts it, you can watch an angst-filled performer but think, “I get it, you’re upset – but about what?”

“I think that’s the beauty of it,” says Nyembo. People think dance is backflips and splits but Gray wants to communicate actual things that are happening in the world and our own understanding of it. “He wants it to be so real that people feel uncomfortable. So he gets a reaction and we can make people question themselves.”

The opportunity to address real-life issues is crucial to the flexors, who tackle racism, injustice, social problems and their own personal experiences. The Armoury show in New York directly responded to the shooting of Michael Brownand the choking of Eric Garner, as well as the tensions and unrest in post-Ferguson America. For the US cohort, flexing represents more than a dance style: it’s a voice for the young and marginalised – and that’s something Gray wants to spread to the UK.

As bodies jerk, judder, surge, spiral and contort across the studio, Gray’s deep voice sends out a rallying cry to his dancers. “Power through our practice!” he shouts. “Freedom and power!”

• FlexN Manchester is at the Old Granada Studios, 11-18 July. Flexn will also be performing at the 2015 Brisbane festival, Australia, 23-26 September.