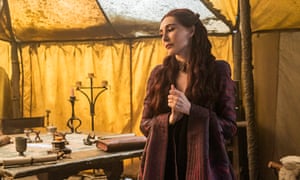 As a melodramatic TV fantasy featuring characters who do not always keep their clothes on, Game of Thrones does not seem the most obvious source of inspiration for haute couture. But at last week’s autumn/winter shows in Paris – as medieval gown followed woodland warrior dress – the Westeros influence seemed difficult to deny.

At Atelier Versace, models wore floral headbands and glistened in slinky chainmail. At Elie Saab, there were sharp-shouldered frocks fit for Cersei, Queen of the Seven Kingdoms, paired with chunky gold jewellery that glittered like a Stark family heirloom. At Dior, diaphanous dresses and monk-like tunics were styled with linked-metal tank tops. Meanwhile, “look 2” at Valentino – a floor-length velvet cape – was exactly what a Game of Thrones heroine would wrap over her shoulders while making a night-time escape.

Even at Schiaparelli – where the clothes on the catwalk were more Wallis Simpson than Daenerys Targaryen – Carice van Houten, who plays the terrifying Melisandre, was sitting in the front row. According to Van Houten, what’s happening is more complicated than designers simply copying the show. “The original costume designer,” she says, referring to Michele Clapton, who left at the end of the current series, “is a very talented, interesting woman and might have influenced certain designers, but she was also inspired by them. It’s a two-way thing.”

“I really think there’s something deeper going on which parallels the dystopian times we are living through,” says US Vogue contributing editor Sarah Mower, who is so captivated by GoT that she is chairing a talk on the subject next month at the Port Eliot festival. “The unbelievable brutality and horror on our screens, beheadings, slavery, maltreatment of the poor, religious fanaticism – is often described as ‘medieval’ behaviour,” she says. “So it’s no wonder fashion is somehow pointing to the fear that we’re plunging into a new dark age.”

Mower is one of many influential Game of Thrones fans in the fashion world. Designer Giles Deacon, for example, is the real-life partner of Gwendoline Christie, who plays super-tough Brienne of Tarth; the pair are friends with super-stylist Katie Grand and designer Katie Hillier. Little wonder that there are a lot ofGame of Thrones conversations taking place on the front row, according to Justin O’Shea, buying director of designer fashion retailer MyTheresa.com. He singles out the outfits of “the dragon queen”, Targaryen, for particular praise: “She has basically coined a new red carpet look,” he says. “The ‘Khaleesi gown’ – Alberta Ferretti meets Versace.”

Admittedly, fashion in Westeros – the land in which Game of Thrones is set – is a world away from the navy blue cashmere uniform that many fashion editors wear. It is a sumptuous, vaguely historical mash-up, all breastplates and battle furs, corseted crop tops and bell-sleeves worthy of the Lady of Shalott. It may be outlandish, but O’Shea thinks its effects have already been seen in real life. “Game of Thrones was part of my fall 2013 trend presentation,” he says. “Jon Stark fur collars and big-hooded Victorian coats were all over the runways. I am a firm believer that the most influential TV series do impact the way people dress. Mad Men is a perfect example.”

Many others are more circumspect. Natalie Kingham, buying director at Matchesfashion.com, describes a “slight influence” next season in “bell sleeves, floral scatter print and mid-length dresses and gowns”. On the high street, where ravishing silk brocade is not usually an option, brands from Topshop to River Island said the look was unlikely to be a strong influence. Even at those haute couture shows that felt pure Lannister v Stark, the show was not explicitly named as a reference (Valentino’s more official starting point was ancient Rome – “mysterious, pagan and ecclesiastic”).

In fact, away from the show’s most ardent admirers, theGame of Thrones effect is much less easily tracked than that of Mad Men – a more wearable kind of costume drama – which spawned a Banana Republic collection and was credited with a revolution in men’s office dressing. But if concerns about looking as though you have got lost on the way to a medieval battle re-enactment are putting fashion fans off, there are ways to dip a toe in the Westeros look without going full dragon lady. Like wearing an Isabel Marant tabard top over an otherwise 21st-century outfit, or swapping your coat for a dramatic faux-fur wrap worthy of Brienne of Tarth.

Certainly the ardent fans will spot the references, no matter how subtle – because they will be looking for them. Says O’Shea: “Even if us Game of Thrones fans are living in a slightly augmented reality, I am pretty happy being there.”