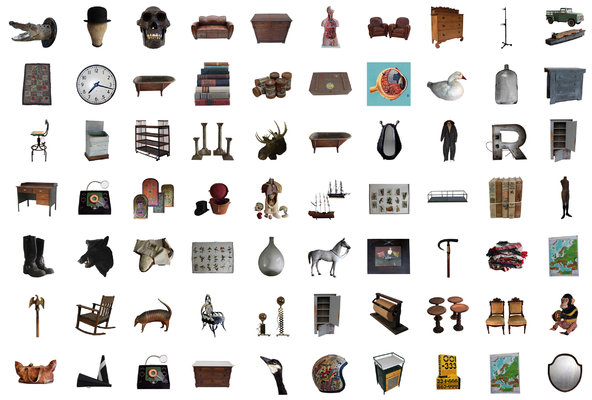 In his former life as a clothing designer and member of the downtown New York fashion collective Asfour, Kai Kühne was a notorious enfant terrible whose party-boy antics made him something of a tabloid habitué. In recent years, however, he has more or less forsaken the city in favor of a woodsy idyll in the western Catskills, embracing what he calls the “new luxury” of local and sustainable living and cultivating a life around upstate’s growing food, design and art scenes. After opening a pop-up farm-to-table restaurant and antiques gallery in the town of Andes in the summer of 2012, Kühne and his boyfriend, John Mollett, are launching a new project this week back in New York: an auction house under the name of Hasbeens & Willbees that will bring a bit of the Catskills ethos down to the city. They kick things off Wednesday with the sale of a trove of objets belonging to their late friend, the upstate-based interior designer Kenyan Lewis, who died suddenly of diabetes complications last December.

The auction will hardly be a sedate, gavel-pounding affair, though. Kai Kühne being Kai Kühne (he’s been known to refer to himself, somewhat tongue-in-cheek, as “kaiser” and “the king”), it is a personality-driven project that is as much about catwalk presentation and performance art as it is about commerce. On Wednesday, at the gallery space the Supermarket in Chinatown, Hasbeens & Willbees will display some 500 items — folk art, furniture, signage and bibelots amassed by Lewis in his work for the likes of Ralph Lauren and Earnest Sewn — all arranged in stylized vignettes. At the center of the space will be tableaux vivants in which live models will interact with some of the objects and then ferry them to the front of the room to the live auctioneer. The models will dress in clothes by the designer Telfar, whose career Lewis had helped to launch, and they will also be Instagramming shots of the crowd. Farm-to-table food will be supplied by the Brooklyn-based restaurant the Pines.

“On the one hand, this is a tribute to Kenyan,” Mollett says. “He had such an influential eye, and was such an advocate for Americana. We wanted him to go out with a bang.” On the other, Kühne adds, “we are also presenting a new vision of what an art form the auction can be. We want to take the Swiffer and dust that world and give it something new. We are going to show things for the future, like new brands, juxtaposed with the old. Energy-wise, there’s a lot of parallels between this and putting on a fashion show.” Items up for bidding include such curios as a Gulliver-size pair of Wrangler jeans; a taxidermied armadillo and cobra; a late-1800s, lifelike wooden horse once used to display saddlery; and a boy-size shop mannequin made of suede. A photo series by the fashion photographer Marcelo Krasilcic, which features a nude redheaded model posing with some of the objects, will also be for sale.