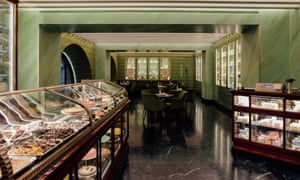 The myth that the fashion crowd don’t eat has long been dispelled. But they do, increasingly, eat fashionably. Next month, Prada will bring its historic Marchesi 1824 bakery to London, complete with a pastry counter and cafe. The Mount Street eatery in Mayfair plans to serve sweet treats, including Milanese panettone and gianduja chocolates, alongside traditional Italian espresso, and is likely to become a point of pilgrimage for fans of the label.

But Prada is far from the only fashion house to branch out into baking in recent years. When Fiorucci opened a flagship store in London’s Soho in 2017, it encouraged customers to “take a bite out of Fiorucci” at the in-store cafe run in collaboration with the city’s “most Instagrammable cafe”, Palm Vaults. The same year, Ralph Lauren opened Ralph’s Coffee & Bar in a corner of its flagship store on Regent Street, following similar installations in New York, Chicago and Paris, and offering everything from “Ralph’s brownie” to “Ralph’s roast”. Round the corner, Burberry had opened Thomas’s Cafe a year earlier.

Claire Ptak, owner of Violet Cakes in east London, says her bakery-cafe has always been popular with those in the fashion industry. “Part of it is the location, but I feel that if you care about visuals and quality and the finer things, then it all goes together,” she says. “If you’re a fashion designer, you also tend to seek out the best things to eat or the coolest places to get a cake.” It makes sense, then, that fashion labels might be seeking a literal slice of the pie.

From a marketing perspective, fashion’s foodie love-in is a progression of “socks appeal”: the idea that investing in small, relatively inexpensive branded items, such as socks, is a way for customers to align themselves with high-end labels, without making a more significant investment. But whereas Fendi socks still cost £90-100, the lolly was a fraction of the price, at just £4.

As ever, Instagram has played a major role in the industry’s latent obsession with food. So called “foodstagram” used to be a foodie haven, but such posts have become a signifier of style, propagated by fashion influencers and accounts. Branded foodstuffs may seem like a temporary purchase, but such items are far more affordable than anything else in most fashion outlets – and a photograph of logo’d sugarcubes (as seen at the Gucci Osteria restaurant in Florence) will live for ever on social media. It’s a cheap, if not particularly discreet, way of showing that you were in store; the instant gratification of sweet treats made digital.

On the high street, the allure of eating where one shops is part of the wider trend for labels selling a lifestyle concept, rather than purely clothes. At Swedish brand Arket, for example, shoppers can sample a cafe menu by Martin Berg, “one of the early proponents of the New Nordic food movement”: think fresh salads and pastries with simple coffees served on minimalist, wooden tables. For those to whom a Scandi outlook and aesthetic appeals, the Arket cafe represents far more than the opportunity to scoff a cinnamon bun.

“Retail spaces are shifting,” says Ptak. “People want experiences, and there is an experience to be had in going to a beautiful cafe next door to a retail outlet. Most of the time people shop online, so you have to have a different reason to draw people into a physical space. It’s about creating a destination.”

We made a choice…

… and we want to tell you about it. We made a choice which means our journalism now reaches record numbers around the world and more than a million people have supported our reporting. We continue to face financial challenges but, unlike many news organisations, we have chosen not to put up a paywall. We want our journalism to remain accessible to all, regardless of where they live or what they can afford.

This is The Guardian’s model for open, independent journalism: available for everyone, funded by our readers. We depend on contributions from our readers. Will you support our choice?

Readers’ support powers our work, safeguarding our essential editorial independence. This means the responsibility of protecting independent journalism is shared, enabling us all to feel empowered to bring about real change in the world. Your support gives Guardian journalists the time, space and freedom to report with tenacity and rigour, to shed light where others won’t. It emboldens us to challenge authority and question the status quo. And by keeping all of our journalism free and open to all, we can foster inclusivity, diversity, make space for debate, inspire conversation – so more people have access to accurate information with integrity at its heart.

Guardian journalism is rooted in facts with a progressive perspective on the world. We are editorially independent, meaning we set our own agenda. Our journalism is free from commercial bias and not influenced by billionaire owners, politicians or shareholders. No one steers our opinion. At a time when there are so few sources of information you can really trust, this is vital as it enables us to give a voice to those less heard, challenge the powerful and hold them to account. Your support means we can keep investigating and exploring the critical issues of our time.

Our model allows people to support us in a way that works for them. Every time a reader like you makes a contribution to The Guardian, no matter how big or small, it goes directly into funding our journalism. But we need to build on this support for the years ahead.